Transport authority board did not review Government Metro announcement 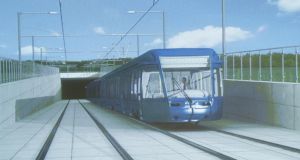 The MetroLink documents include an outline cost-benefit analysis and an engineering assessment as well as details of the emerging preferred route.

The board of the National Transport Authority (NTA) did not review the announcement by the Government of the new MetroLink project before it was published last month. The €3 billion MetroLink is a central element of the Government’s new infrastructure programme.

Minutes just published of a recent NTA board meeting also appear to show support at the board for the Dart Underground project, funding for which was not included in the the recent 10-year Government programme.

The NTA said that details announced by the Government last month as part of its investment programme were reviewed by NTA management but not the board. In response to queries it said that the board would review the final selected route and project after a public consultation programme now under way. A spokesman also said the board had been updated regularly on progress on the Metro plan, including details of the emerging preferred route, announced on March 22nd.*

The emerging preferred route would cover a 26km stretch from Swords in north county Dublin to Sandyford, south of the city. It would involve knocking down some houses and apartments and disrupting playing facilities for some sports clubs for a prolonged period, including at Na Fianna GAA club in Drumcondra.

An NTA spokesman said the work undertaken so far had identified the “emerging preferred route” as the likely optimal scheme from a technical design perspective without the benefit of public consultation. He said the final route would be decided after consideration and evaluation of the issues raised during the consultancy. He added: “The NTA board will consider the final proposed route following the consultation process.”

The NTA is responsible for planning and delivering public transport services. The recently published board minutes show that the NTA board, chaired by Fred Barry, the former chief executive of the National Roads Authority, discussed the issue of the Metro at its January meeting. The announcement of the detailed Government infrastructure plan were presented to it at a meeting on February 23rd, after the Government announcement.

A note on the minutes of the February meeting say that an amendment was made to the January minutes, as proposed by Berna Grist, a non-executive board member, who is senior lecturer in the school of planning and environmental policy at University College Dublin. The amendment read that NTA chief executive Anne Graham and deputy chief executive Hugh Creegan had “outlined development in respect of Metro and Dart Underground since the board’s December meeting”.

The amendment continued: “There was considerable discussion about the forthcoming national 10-year capital investment programme, particularly in relation to rail investment. It was agreed that, should the Dart Underground not be included in the 10-year programme, or not fully included, developments which are being undertaken must be designed so as not to preclude the future development of the Dart Underground project.”

Funding for the the Dart Underground – a 7.6km underground tunnel between Heuston and Pearse stations with a number of new underground stations – is not included up to 2027 in the new Government programme, though significant other Dart developments – including some which were part of the underground plan – are included.

While the final green light has yet to be given to the Metro plan, a €14 million contract was recently awarded to an engineering design consortium to develop the design proposals for the project. According to the NTA, the consortium “is involved with, and part of, the public consultation process and is tasked with taking on board the outcome of the public engagement. This arrangement is the normal arrangement that is used during the design phase of major infrastructure projects.”

* an earlier version of this story incorrectly stated that the emerging preferred route was announced on February 22nd. This should have read March 22nd.

ESRI warns of biggest slump ever, Brown Thomas’ plans and Michael O’Leary has a point 06:30
Irish banks’ failure to innovate could leave them written off for good 06:30
The ‘new normal’ in Dalata Hotels will include face masks 06:15
EU needs to rebuild GDPR after only two years 06:00
Mortgage payment-break numbers rise to 78,000 05:55

1 Brown Thomas and Arnotts shoppers will be able to book time slots for entry
2 Beware of the rush to get back to normal business amid Covid-19
3 Irish economy to contract by 12%, ESRI forecasts
4 EU needs to rebuild GDPR after only two years
5 The ‘new normal’ in Dalata Hotels will include face masks
6 O’Leary casts unwelcome light on a very Irish political compromise
7 Michael Smurfit: total lockdown of economies a ‘serious mistake’
8 Banks move to avert fresh arrears crisis
9 Electrical contractors fear closure under new pay law
10 Joint accounts: if one of us dies, can the other access the money?
Real news has value SUBSCRIBE