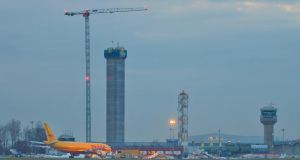 The new IAA air traffic control tower at Dublin Airport will facilitate parallel runway operations by 2021 and be one of the tallest structures in Ireland.

The end of March is traditionally the beginning of the summer flight schedules and this year there will be dozens of new flights from all Irish airports. Two flights to China will be the highlight of the year with Cathay Pacific delivering Hong Kong and Hainan Airlines operating Beijing in June. Two new transatlantic flights by Aer Lingus include Philadelphia and Seattle, and Air Canada will operate four times a week to Montreal.

Services to European cities will include a year-round schedule from Cork to Paris, Ryanair to Stuttgart and, for the first time, a service to Zagreb by Croatia Airlines. There will be 195 routes from Dublin this year, serving 42 countries.

Dublin Airport with ESB has installed 268 solar panels on top of the airport’s reservoir system to provide more than half of the annual energy requirements. The solar farm is part of an energy agreement between DAA and ESB to achieve an overall target of a 33 per cent reduction in energy consumption at the airport by 2020.

DAA chief executive Dalton Philips said: “Over the past three years Dublin Airport succeeded in reducing its carbon footprint by 5,000 tonnes, which is equivalent to a 10 per cent reduction in carbon emissions under its control.”

Last week Lufthansa introduced a new boarding procedure in Los Angeles international airport, using facial recognition of boarding passengers. Automated kiosks in the airport crosscheck passengers with the US customs and border protection database and releases them to board, in seconds. Passengers will not need passports or boarding cards to enter the aircraft. Lufthansa expects the new system to halve the time it takes to board. Delta is trialling a system that uses fingerprints instead of boarding passes.

Yet another good start for the hospitality industry. New data from research analyst STR indicates that the average daily rate of Dublin hotel rooms rose close to 4 per cent in January, with the average rate of occupancy jumping one percentage point to almost 90 per cent.

Meanwhile, revenue per available room (revpar), which incorporates both room and occupancy rates, increased 5.4 per cent in the capital in January. Analysts at Davy Research said: “Our forward rate tracker for the Dublin market supports our 2018 revpar forecast of 5.5 per cent, with particular market strength highlighted over the summer months.”