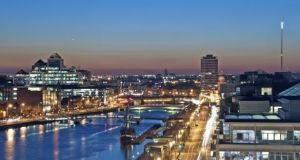 The OPW is working with tourism officials and Dublin City Council to identify public buildings in the city that could be used to host gala dinners for big international conferences. Photograph: iStock

The Office of Public Works (OPW) is working with tourism officials and Dublin City Council to identify public buildings in the city, such as museums, that could be used to host gala dinners for big international conferences.

The OPW has confirmed it is engaged with Fáilte Ireland, the State tourism authority, to “explore options” for gala dinner venues.

Tourism officials are seeking to boost the number of major international industry conventions hosted in Dublin, as part of a plan to boost revenues from business tourism to €1 billion by 2025, up from €760 million in 2017.

Speaking last week on the fringes of Meitheal, a major industry sales event where the Irish industry pitches its wares to foreign agents and other buyers, Fáilte chief executive Paul Kelly said there was a major shortage of gala dinner venues in the city.

“With a big conference that attracts thousands of delegates to a city, the organisers usually want to bring them offsite for the dinner; they want a different type of venue,” he said.

“When you go to big conferences in other cities, such as London or Stockholm, you notice that they often use museums etc for gala dinners. We are working with the OPW and the council to try and find these venues in Dublin.”

Mr Kelly did not want to be drawn on which specific buildings in Dublin might be suitable, but he said any museums or other public buildings with great halls could only be used if they met safety and access standards and where the facilities available made it “economic” to host gala dinners.

The OPW said it operates a “strategic partnership” with Fáilte Ireland “under which [we] consider a range of developments that would benefit tourism generally . . . In that context, we are considering a variety of tourism infrastructure projects and we are exploring options in Dublin in respect of a gala dinner venue.”

More than 300 foreign-based tourism buyers attended Meitheal, in the Citywest convention centre on the outskirts of the city. This included about 60 buyers for the meetings and business incentive travel market.

The latest data from Fáilte Ireland on business tourism, shared last week with The Irish Times, show that the agency’s “Meet in Ireland” team helped to secure international conferences worth €57 million in the first quarter of this year.

It said it hit a third of its annual target in the first three months of the year. One in six of the meetings it secured were for venues outside Dublin.