Irish boss of Qantas says Covid vaccines will be mandatory 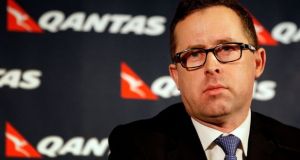 The Irish man leading Australia’s largest airline has said it will be mandatory for passengers to get vaccinated against Covid-19 before travelling on its aircraft.

There has been positive news lately in relation to the race to develop a vaccine against Covid-19, with Oxford the latest to announce positive test results on Monday following recent announcements by Pfizer BioNTech and Moderna.

“We are looking at changing our terms and conditions to say for international travellers that we will ask people to have a vaccination before they can get on the aircraft,” said Mr Joyce.

“Whether we need that domestically, we’ll have to see what happens with Covid-19 and the market, but certainly for international visitors coming out and for people leaving the country, we think that’s a necessity.

“I think that’s going to be a common thing talking to my colleagues in other airlines around the globe.”

Mr Joyce said he was hoping to have traffic back to about 60 per cent by Christmas as domestic flights resume between Sydney and Melbourne.

“If we can get Melbourne and Sydney back to where it was pre-Covid that will be 3,000 people that didn’t have a role, were stood down, were working at Woolworths, somewhere else that are working for the airline again,” he said.

He added that 25,000 seats sold within 48 hours as soon as travel between New South Wales and Victoria opened up this month.

“Aussies love to travel, the two cities are unbelievably well connected, and we went from 45 flights a day before Covid, to one flight a day,” Mr Joyce said. “Today we’re back to 70 flights on the first day of opening up.”

However, he said it could be the end of next year before flights resume to any great extent to places like the US and Europe.

“Unfortunately with the levels of the virus in the United States and in Europe, we’re not going to see operations to those destinations in any real strength until we see a vaccine being rolled out, which is likely towards the end of 2021,” he said.