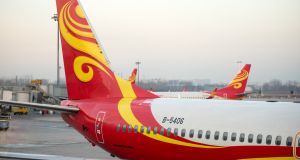 The Chinese Government is extending visa-free access to Hainan to make the destination more popular.

The annual list of the most expensive cities to do business in for 2018 was announced this week. New York, as ever, topped the list. However, three Swiss cities also appeared on the list. Number two was Geneva; Zurich and Basel came in fourth and ninth. London-based ECA conducted the survey.

London, after leading the list for many years, has fallen out of the most expensive, probably due to the effect of Brexit. The top 10 cities are New York, US. Geneva, Switzerland. Zurich, Switzerland. Luanda, Angola. Bridgetown, Barbados. Paris, France. Nassau, Bahamas, Washington DC, US. Basel, Switzerland. Monaco.

The Air Transport World’s 2018 Annual Airline Industry Achievement Awards named Air Canada as the Eco-Airline of the Year. ATW cited the carrier’s commitment to emissions reductions through supporting the development of alternative fuels and its numerous green programmes and partnerships, including being the first airline in the world to voluntarily join the World Bank’s IMF Carbon Pricing Leadership Coalition.

Good news for Irish visitors to Hainan in China. The Chinese Government is extending visa-free access to make the destination more popular. New regulations will come into effect in May just ahead of the new four-times weekly service to Dublin. Previously you could travel only in groups and for a maximum of 21 days.

A clean broom at Wynn Resorts

Elaine Wynn, ex-wife of Steve Wynn, is looking to reconstitute the board of Wynn Resorts Ltd, the casino company she co-founded, after a sex-harassment scandal toppled her ex-husband from his job as chief executive officer.

Ms Wynn, who settled all litigation with her ex-husband this week in exchange for $25 million (€20.3 million), said she wanted to remake the board with a majority of new members, according to a regulatory filing on Tuesday.

Steve Wynn stepped down from the luxury resort operator in February after a series of articles detailed his alleged harassment of female employees at the company. Mr Wynn subsequently sold all of his shares and settled a long-running dispute with his ex-wife that now allows her to vote or sell her 9 per cent stake in the company.

Ms Wynn, now the largest individual shareholder, said in the filing she’d like the Wynn Resorts board to be declassified, meaning each director would stand for election every year, or she would like to nominate her own members, with the goal of changing the composition of the board that kicked her out three years ago.

She indicated in the filing that she doesn’t want the company to sell its still-under-construction Boston area casino without regulators there first seeing dramatic changes in corporate governance. – As reported by Bloomberg.