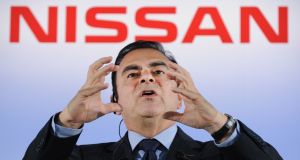 Nissan updated its corporate governance code, a month after the shock arrest and indictment of former chairman Carlos Ghosn brought differences with partner Renault out in the open after a two-decade partnership.

As part of the new code, Nissan clarified its policy on cross-shareholdings, in which two companies hold stakes in each other. The board will examine whether the purpose of each such shareholding is appropriate and whether the benefits and risks cover the cost of capital.

A Nissan spokesman said Wednesday the exchange filing on Christmas Day was routine and mandatory to comply with Japanese corporate governance code requirements. The deadline for such submissions was the end of the calendar year and therefore the timing of the release wasn’t unusual.

“The policy itself has not changed in any way, and the clarification does not refer to alliance partners, but rather to the company’s holdings in certain other listed companies,” Nissan said in an email.

“Nissan is one of hundreds of listed companies in Japan issuing an update at this time in this manner.”

Nissan shares rose as much as 3.3 per cent in Tokyo on Wednesday and were poised to close higher for the first time in eight trading sessions. Renault is the largest shareholder in Nissan and the Asian company in return is the second-largest shareholder in the French carmaker. The two companies also have minority shareholdings in Germany’s Daimler. Nissan said it also has minority cross-shareholding with other companies.

Nissan’s exchange filing comes at a time when Renault asked the Japanese company to call a shareholder meeting to discuss corporate governance issues. Bloomberg News reported earlier that Nissan was shoring up cash to build its firepower amid tensions with Renault.

The move comes as the two long-time partners have differed over how they approach the issue of Ghosn’s arrest. While Nissan immediately sacked the official as its chairman, Renault chose a different option by naming a deputy for the chief executive officer role he played at the French carmaker. Renault couldn’t be reached on Christmas Day holiday.