Hotel reports profit of more than €1.3m compared with just €28,000 a year earlier 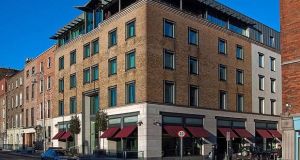 The Morrison hotel on Dublin’s quays experienced a surge in bookings last year on the back of the city’s tourism and commerce boom, according to accounts for its operating company, Swift Row.

The hotel, which is owned by Yelena Baturina, reputedly Russia’s richest woman, booked profits of more than €1.3 million last year, up from just €28,000 the prior year.

The hotel did not release its turnover – Swift Row filed only abridged financial statements – but it signalled “substantial growth” in room revenues and “steady growth” in its bar and restaurant sales.

Swift Row’s directors, including the hotel’s general manager Patrick Joyce, said it achieved occupancy of more than 80 per cent, as the tightened supply of accommodation in the city sparked a boom for hotel operators.

It also attributed some of its improved performance to the reach of the Doubletree by Hilton brand, under which it operates. The boutique hotel, which opened in 1999, was originally designed by John Rocha.

Ms Baturina, who owns the hotel via an Austrian company, Inteco Beteiligungs, received a dividend of €500,000 from the Morrison.

She is married to the former mayor of Moscow, Yury Luzhkov, who along with Ms Baturina was once close to Russian president Vladimir Putin.