Airline doubling its intake of apprentices, and hopes to get more female applicants 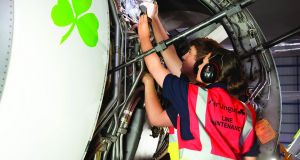 Aer Lingus’s recruitment drive comes at a time when it is expanding, specifically over the north Atlantic, and is bringing in new aircraft over the next two years

Aer Lingus will double the number of aircraft engineering apprentices it hires this year to 20, and hopes to get more female applicants for the jobs.

The airline began campaigning to recruit aircraft maintenance and engineering apprentices on Tuesday. Aer Lingus wants to hire 20 trainees this time around, compared to 10 last year. Three of last year’s intake were female.

The apprenticeship scheme is a four-year programme based in Shannon and Dublin Institute of Technology, run in conjunction with training body Solas.

The programme is run in seven phases. Apprentices move between classroom training in either of the two facilities and on-the-job experience at the airline’s maintenance hangar in Dublin Airport.

Applicants need the State’s Junior Cert exam as a minimum, but Aer Lingus says it is also keen to hear from people with the Leaving Cert or degrees.

The carrier’s recruitment drive comes at a time when it is expanding, specifically over the north Atlantic, and is bringing in new aircraft over the next two years.

“Following on from our recent future pilot-recruitment announcement and substantial growth at the airline with the introduction of new aircraft and new routes to Seattle and Philadelphia this year, we are delighted to be able to provide this apprentice scheme again to 20 new applicants.”

Aer Lings has hired 46 apprentices since it launched its scheme in 2011.