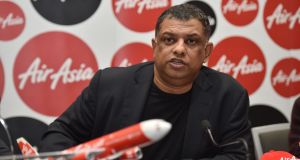 According to news agency Bloomberg, neither Mr Fernandes nor a group spokeswoman responded to requests for comments.

AirAsia India is a joint venture with industrial giant Tata, which has a majority stake in the company. The country’s airline ownership rules limit non-Indian investors to minority stakes in any carriers based there. Dublin Aerospace chief executive Conor McCarthy has a small stake in AirAsia and works as a consultant for the airline, which he helped found, while the group itself recently set up an aircraft leasing business here.

India recently scrapped rules restricting licences to fly internationally to carriers with five years of domestic operations and a minimum of 20 craft in their fleets.

Instead, they get international permits if they deploy 20 planes or 20 per cent of their capacity on local services. This opened the market to players such as AirAsia and Singapore Airlines.

AirAsia is keen to exploit opportunities in India, which is one of the world’s fastest-growing aviation markets.

The country has a population of more than one billion people. Its growing middle class means that more people there can afford to fly for the first time.

Mr Fernandes has established affiliates over the years in Indonesia, Thailand, India, Japan and Vietnam, trying to take advantage of world-beating traffic growth in the region.

He founded AirAsia as a low-cost carrier in Malaysia, where it is the biggest airline by fleet size and destinations.

AirAsia has ordered hundreds of craft, costing hundreds of billions of euros, from Airbus to meet its expansion plans. The India unit alone is seeking 40 planes.

Some time ago, Mr Fernandes sold a stake that he originally held in Dublin Aerospace, the aircraft maintenance business that Mr McCarthy established in the city’s airport.

Mr McCarthy, a former Ryanair executive, worked with Mr Fernandes on setting up AirAsia and took a small shareholding in the group, which he retains.

While he continues to do some consulting work for the airline, he stood down from its board more than two years ago. There is no suggestion Mr McCarthy is linked to the Indian police investigation into Mr Fernandes and he did not comment on reports of the investigation.

He defended the London club’s decision to sack manager Ian Holloway after just 18 months there following a 16th-place finish in the championship, the league below the English premiership.

Mr Fernandes said hard decisions had to be made as the club matured. – Additional reporting: Bloomberg

1 Why are markets booming when a crash is on the way?
2 Brexit: System agreed for Irish goods to skip checks on UK trade
3 High Court appoints interim examiner to Compu b parent company
4 Stocktake: Playing poker with the day traders
5 Why the Fed thinks Goldman is America’s riskiest bank
6 David McCullagh announced as co-host of RTÉ Six One News
7 Rosslare Europort in line for €30m upgrade from Irish Rail
8 Unemployment falls to 5.3% but true figure could be much higher
9 Could your old car be giving away all your secrets to its new owner?
10 Supreme Court in Dublin clears Bernie Madoff Ponzi loss case for hearing
Real news has value SUBSCRIBE