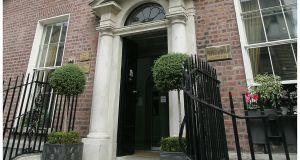 Pretax profits at the five-star Merrion Hotel in Dublin rose by 29 per cent last year to €4.14 million on the back of strong average room rates and record occupancy levels.

New accounts for Hotel Merrion Ltd also show that revenues increased by 10 per cent to a record €25.06 million in the 12 months to the end of October 2018. The profit took account of non-cash depreciation costs of €749,983.

The Merrion is the hotel of choice for a host of Hollywood A-listers and music stars when they arrive into Dublin. Bill Gates of Microsoft stayed there last week while visiting the city.

The hotel comprises 123 rooms and 19 suites and, according to the directors’ report, “had a good year with revenues, room rates and occupancy being at their highest levels reflecting a strong performance by the Dublin market”.

The directors added that “the near-term outlook remains strong and we believe we can maintain revenues and profitability”.

The company last year paid a dividend of €96,567 to its owners. Businessman Lochlann Quinn and billionaire Martin Naughton of Glen Dimplex each own 25 per cent of the business, with the balance held by the Northern Ireland-based Hastings Hotel Group.

Online advertised room rates at the hotel today ranged from €330 for a queen room to €3,200 per night for the penthouse suite.

On the risks facing the business, the directors state that the VAT rates for hotels, bars and restaurants has increased from 9 per cent to 13.5 per cent.

“While this will not affect the margin, there is a risk it could impact occupancy rates and revenues from food and drink,” the accounts state.

The number of staff employed by the year increased last year from 296 to 327, with payroll costs increasing from €8.8 million to €10.28 million.

The figures show that 72 staff are in management, while 235 are hotel staff.

Accumulated profits at the firm last year increased from €2.74 million to €6.19 million. The company paid corporation tax of €596,138 last year.