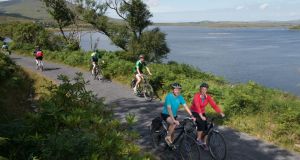 As he officially opened the 40km Mullingar to Athlone Cycleway in Co Westmeath on Sunday, Taoiseach Enda Kenny said he wants a national strategy for walks and trails .

He said he would to return to Westmeath in the coming weeks to raise money for charity by cycling the new cycleway along with four local TDs.

Hundreds of people attended Moate Railway Station for the official opening. The €7 million track, which is built along an old unused rail line, now forms part of the planned 277km Dublin to Galway Cycleway.

Mr Kenny said “I hear lots of people saying that provincial Ireland is dying, they should be here to see this. This is the start of a real fightback here for Moate.”

“In five, 10 years this will be a throbbing moving entity with people from all over the world who want to come here. What we need is a national strategy for the lines, for the canal paths, for the woodland walks, for the Coillte walks, for the mountain trails,” he said.

“By 2018, if we continue on the path that we are on, we won’t have to borrow to run our country at all,” he said. He envisaged a 10-year spend of €100 million on trails nationwide.

Speaking of plans for the €100 million-plus Centre Parcs adventure village in nearby Ballymahon, Co Longford, Mr Kenny told the gathering “that application will be in for full planning permission in the next two weeks.”

The rail track, which closed in 1987, had previously been used to film The Great Train Robbery starring Sean Connery, he said.

The track will now add to the 60kms of trackway already in place along the canal in Co Westmeath and will have a positive and transformative impact on tourism in the midlands, he added.

Mr Daly praised the local community for taking ownership of the project and expressed his belief that their involvement will make a trip along the cycleway an irresistible proposition. Mr Gallagher was delighted at the large attendance at the opening. He said the cycleway would provide a basis for further investment and business in the area.