Irish aircraft lessor Avolon files in US for IPO 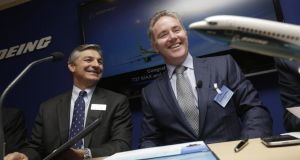 JPMorgan, Morgan Stanley and Citigroup are underwriting the IPO, the company said in a preliminary prospectus filed with the US Securities and Exchange Commission.

Dublin-based Avolon said in a statement that the number of shares to be sold and the price range had “not yet been determined.”

Rival Awas Aviation Services, also headquartered in Dublin, is planning an IPO in the second half of this year.

Avolon had a fleet of about 202 aircraft as of March 31, serving 46 customers in 27 countries. Since its launch in 2010, the company had raised about $7.5 billion in capital till the end of March.

The company is run by Domhnal Slattery, a veteran of former industry giant Guinness Peat Aviation, which was broken up in the early 1990s after a failed IPO.

Its focus is on young and fuel-efficient single-aisle aircraft made by Boeing and Airbus Group. It delivered a total of 34 aircraft valued at more than $2 billion last year.