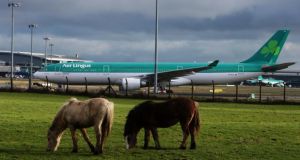 Aer Lingus aircraft at Dublin airport. The airline is in good shape at present, arguably enjoying some of its best trading years since the Irish economy collapsed in 2008. Photograph: Brian Lawless/PA Wire

It’s six months since Willie Walsh first tabled a bid for Aer Lingus. It’s four months since Aer Lingus told the stock market that it was willing to recommend IAG’s €2.55-a-share offer for the Irish airline.

And it’s three months since the Irish airline updated investors on its interaction with the interdepartmental group established by the Government to help it decide if the State’s 25 per cent holding should be sold to IAG.

We’ve had radio silence from the company since then, save for the occasional comment to media to the effect that it would be better for the airline if the Government made a decision sooner rather than later.

Aer Lingus has been in a holding pattern while the Government has dithered on whether or not to sell its shares.

Only in Ireland could such a charade play out for such a long time with a major listed company.

At least now we know the government’s position but the game is still afoot as Ryanair, which owns 29.8 per cent of Aer Lingus, has yet to give its opinion on IAG’s bid.

So all of this huffing and puffing by Enda Kenny and Joan Burton might be for nought.

To be fair to Aer Lingus, the airline has continued to perform well in the interim period, suggesting that management has not allowed itself to be distracted by the bid.

In a trading update on April 29th, Aer Lingus announced an 8 per cent rise in revenues for the first quarter and a 17 per cent increase in its net cash position to €651 million.

The airline made an operating loss of €48 million but this was no surprise as the first quarter is off season and traditionally loss making for the airline.

Aer Lingus is in good shape at present, arguably enjoying some of its best trading years since the Irish economy collapsed in late 2008.

The board of Aer Lingus is very much in favour of IAG’s offer. It argues that a deal would enhance Ireland’s position as a hub for Europe on the North Atlantic, accelerate its long-haul growth plans, grow employment, enhance short-haul growth, strengthen Ireland’s connectivity, and provide access to a global cargo network.

It would also get Ryanair out of its hair, once and for all, which is no doubt an attraction.

But we should be careful what we wish for in terms of IAG. As a former chief executive of Aer Lingus, Willie Walsh would love to own the airline and no doubt has great plans for the company.

Walsh has played his hand well with the Government, getting it to the point of acceptance after months of careful negotiation.

He’s given a guarantee of seven years on the use of Aer Lingus’s valuable Heathrow slots for Dublin, Shannon and Cork, has committed to retaining and developing the Aer Lingus brand from a headquarters here, and is offering to develop Dublin Airport as a hub for other British Airways traffic.

Heathrow is Europe’s busiest hub and with the Conservatives now having a majority in Westminster the long- mooted third runway might become a reality, allowing the airport to grow for decades to come.

Aer Lingus’s legacy rights to slots there are extremely valuable for a country that relies heavily on tourism, foreign direct investment and exports. We shouldn’t surrender them lightly.

Walsh also won’t be with IAG forever and who’s to say that his successor will be as enthusiastic about its investment in Aer Lingus? Especially if IAG hits some turbulence.

UK airline BMI withered on the vine under Lufthansa’s ownership and Air France off-loaded its Swords-based subsidiary CityJet when it no longer fit its investment criteria.

Aer Lingus’s management has demonstrated that the airline can operate successfully as an independent carrier. Even in the midst of Europe’s worst recession in living memory and with Ryanair squatting on its share register. It’ll celebrate its 80th birthday next year.

Michael O’Leary might yet queer the pitch by rejecting IAG’s offer, although this might only be a temporary blip given that the competition authorities in the UK seem determined to force Ryanair to sell down its position in Aer Lingus.

Otherwise, Aer Lingus looks set to join the long list of Irish businesses to slip into the ownership of a foreign multinational. This is not necessarily a good thing.