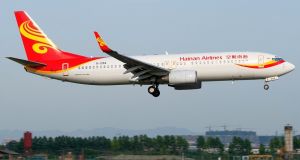 Chinese airline Hainan is close to deciding on whether to open a route from Dublin to Beijing in what would be Ireland’s first direct link to Asia’s biggest economy.

Hainan, part of the HNA Group which recently bought Irish aircraft lessor, Avolon, has been actively considering the possibility of flying from the capital to Beijing for several months.

The group’s chief operating officer, William Zhang, confirmed on Tuesday that once it has bedded down its recently launched service from the Chinese city to Manchester, that it would focus to Dublin.

Mr Zhang said that it was “very likely” that the airline, China’s fourth biggest, would being flying from Beijing to Dublin, once there was a market for the service and the timing was right.

Avolon chief excutive, Domhnall Slattery, stressed that it had to make good business sense for Hainan to launch the service before it could go ahead. However he confirmed that Dublin Airport Authority and the carrier were in talks.

He and Mr Zhang were speaking at a briefing on Avolon’s integration into the $25 billion HNA Group, whose interests span aviation, travel and logistics.

The Government, business groups and the hospitality industry have been anxious for some time to open a direct link with China, the world’s second biggest economy and largest tourism market.