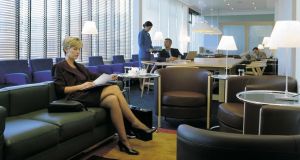 Squaring the circle: AerClub will be powered by the travel rewards company Avios, with members collecting three Avios points for every €1 spent on flights booked with Aer Lingus

Members of the Aer Lingus Gold Circle frequent flyer programme have taken to social media to express anger at major changes to the programme due to take effect this week. “Terrible”, “hopeless”, and “you’ve shafted us” are among the printable terms being used by angered members.

The move to Aer Club follows the takeover of the airline by International Airlines Group (IAG), the parent company of British Airways, for €1.36 billion last year.

The Gold Circle Club, which has more than 100,000 members, has operated since 1987 and is beloved of the Irish business community. Membership offers a Fast Track lane to boarding gates, access to the Gold Circle lounges (with free food, drink, wifi, newspapers and showering facilities) and the ability to accrue points with every eligible flight taken, which can be exchanged for free flights or upgrades.

Passengers usually prefer an air-miles based programme as now that the link between distance flown and cost of the ticket has been broken (it can be cheaper sometimes, given a certain set of conditions, to fly from Dublin to New York than it is to fly from Dublin to London), airmiles are relatively easy to rack up if you work the system.

In this sense, Aer Lingus’s new Aer Club programme is in keeping with international trends in airline frequent-flyer programmes. But because Gold Circle members have got used to – and enjoyed the privileges of – the airmiles-based reward system over the past 30-odd years, this changeover to a revenue-based system is being met with outrage by some.

According to an Aer Lingus Corporate PR spokeswoman, AerClub will be powered by the travel rewards company Avios. “AerClub members will collect three Avios points for every €1 spent on flights booked with Aer Lingus,” according to the spokeswoman. “ The move away from our traditional air miles model means you can earn points with every flight you buy, giving you more opportunities to build up your balance. In the Gold Circle system certain discounted ticket fare classes were not eligible for points. This is not the case with AerClub.”

On paper, Aer Club seems very straightforward: you will be rewarded three Avios points for every €1 spent on flights booked with Aer Lingus. Thus, the more you spend the higher the tier (and the greater the traveller benefits).

According to the spokeswoman: “You can also earn Avios points on the ground and online with our retail, travel and leisure partners across Ireland, Europe and North America. Aer Lingus will announce its new non-air and airline collection and redemption partners over the next couple of months.”

It’s quite clear what’s in it for Aer Lingus. Under the old scheme there were only 100,000 members, who had to fly a certain amount each year to retain their membership status. Under this new revenue-based scheme, however, the airline anticipates that it will have 300,000 AerClub members as Avios points will be able to collected not just from flights but from spends in shops, hotels and brands online via the Avios eStore.

When it comes to clubs though, bigger is not always better. The next few weeks should reveal if Aer Lingus’s new AerClub is a flyer.