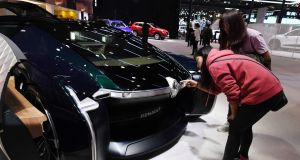 While the auto industry gathers in Shanghai for one of the big automotive gatherings of the year, the industry’s focus is on the stern challenge facing Europe’s car industry from 2020

While the auto industry gathers in Shanghai for one of the big automotive gatherings of the year, the focus is not only on a declining Chinese market for new cars but the stern challenge facing Europe’s car industry from 2020.

Strict new carbon dioxide emissions targets will be phased in next year across the EU, with the threat of punitive fines for those who fail to comply.

Yet the industry, broadly, is not ready.

“It’s going to be a hell of a job,” said Carlos Tavares, chief executive of Peugeot owner PSA last month. “But we are going to meet them, whatever it takes.”

Under the rules, carmakers must cut their average fleet emissions to less than 95g per kilometre of CO2 by 2021.

They face a €95 fine for every gram of CO2 that exceeds the target – multiplied by the number of cars sold that year.

“We are talking about a potential €30 billion penalty for the industry,” Volkswagen chief executive Herbert Diess warned investors at the company’s annual capital markets day.

Yet emissions are heading the wrong way.

New data for 2018 showed average emissions rose to a four-year high of 121g of CO2 per km, according to Jato Dynamics, an auto data supplier.

Sales of SUVs, which are heavier and therefore produce more CO2 than traditional saloons, have risen by three-quarters since 2015, according to global information provider IHS Markit.

Another complicating factor is the sharp decline in diesel sales.

Buyers lost faith in the eco-credentials of diesel cars following the Volkswagen scandal of 2015, when it emerged that the cars produced far higher levels of harmful nitrogen oxides than advertised.

The scandal dealt a blow to diesel – and to carmakers that had been relying on the fuel to cut CO2 emissions, as diesel vehicles typically emit a fifth less carbon than petrol cars.

Diesel vehicles accounted for as much as 56 per cent of EU sales in 2011, but last year the share fell to 37 per cent.

All this has left the industry in a bind.

He estimated it will cost the industry €15.5 billion just to make its vehicles compliant.

“It’s a toxic cocktail for the carmakers,” said Patrick Hummel at UBS. “The sales cycle has peaked, CO2 compliance is a headwind and they have ever-increasing spending on technology.” – Copyright The Financial Times Limited 2019

1 118 Grafton Street offers prime pitch for the post-pandemic era
2 How to avoid a communication breakdown
3 ‘It’s fantastic living here – in the gateway to Asia’
4 Sorry, Domhnall Gleeson, I don’t want to chat to you anymore
5 Can we finally say farewell to the scourge of hot-desking?
6 Irish tech company Asavie acquired by Nasdaq-listed Akamai
7 Whistleblower warned EY of Wirecard fraud four years before collapse
8 Customers judging trustworthiness based on Covid-19 behaviour
9 Brexit to curb services trade with UK, accountants group warns
10 Wifi problems? Quick tips to get your home internet out of the slow lane
Real news has value SUBSCRIBE