New security regulation to come into force in 2020 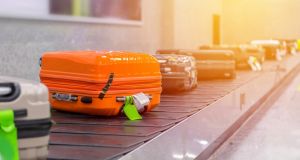 The new regulations demand that, by 2020, airport screening systems for baggage that passengers check in must match detection levels similar to medical CAT scans, which produce more detailed images than X-rays.

Installing the equipment needed to scan the baggage will cost Donegal, Kerry, Knock and Shannon airports a total of €14.3 million.

The Department of Transport has approved part of the initial funding for the improved baggage security regime, he said, adding that the airport planned to have the new infrastructure in place by the beginning of 2020 at the latest.

Kerry Airport, which serviced more than 335,000 passengers last year, will spend about €1.4 million on the equipment, according to its financial controller, Basil Sheerin.

Although the airport has yet to apply for funding from the Department of Transport, Mr Sheerin said it was looking to install the new equipment in the fourth quarter of 2019, when the airport was “least busy”.

“We’ll be going for funding on it in our application in 2019,” Mr Sheerin said.

Donegal Airport, which has also yet to apply for funding, intended to spend about €1.4 million as well, a spokesman said.

The new system would cost State-owned Shannon Airport about €10 million, the Minister for Transport, Tourism and Sport, Shane Ross, told the Dáil recently.

Mr Ross said the figure would present “significant financial difficulties” for the airport’s owner, Shannon Group, which had not included the money in its forecasts.

He added that the department was unlikely to provide the airport with cash for this, but said his officials were discussing the issue with Shannon, which handled 1.75 million passengers last year.

The group would not say how much it would have to spend on the new system, but said the cost would be significant.

“As Shannon does not receive any State subvention, the airport will fund development from its own resources,” the group added.

EU law allows the department give cash to regional airports to cover costs such as ensuring security systems comply with the bloc’s standards.

However, the rules bar the Government from aiding the three State airports, Cork, Dublin and Shannon, which operate commercially.

DAA, owner of Cork and Dublin airports, would not say how much complying with the new rules was likely to cost the State company. DAA is planning a major investment in Dublin, which has two terminals and catered for almost 30 million travellers in 2017.

The company has already pledged that improving its facilities will not result in increased passenger charges.