Details emerge of ‘financial transgressions’ that led to Ghosn arrest 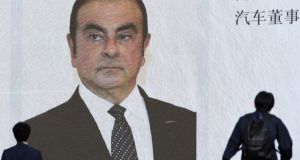 Almost 24 hours after Carlos Ghosn’s shock arrest, details are emerging of the alleged financial transgressions that have the auto industry titan facing jail-time in Japan, throwing the car alliance that he built into turmoil.

Nissan, one of three companies in the world’s biggest carmaking union, paid “huge sums” toward Mr Ghosn’s residences in four cities around the world that weren’t justified by the business, Japanese broadcaster NHK said Tuesday. Elsewhere in the local media, a picture is developing of how Ghosn’s alleged violations of Japanese financial law may have come to light, with prosecutors reported to have entered into a plea-bargain with a foreign executive at Nissan.

Prosecutors in Tokyo, where Mr Ghosn was arrested Monday, have been publicly tight-lipped.

They have confirmed that the Nissan chairman – along with representative director Greg Kelly – was arrested for failing to declare some 5 billion yen ($44 million) in Ghosn’s income on Nissan’s official securities reports submitted over five years starting from 2011. In the meantime, Mr Ghosn and Mr Kelly’s whereabouts remain unconfirmed and the timeline for when they may be charged is at this stage unclear.

From the carmakers to whose fortunes Mr Ghosn is inextricably linked through this stewardship of the alliance, there hasn’t been much on the nature of the allegations either.

Nissan chief executive Hiroto Saikawa declined to give details on what charges were expected against the two men in his impassioned late-night press conference Monday in Yokohama, outside of Tokyo, citing the ongoing criminal investigation.

Some apparent details of the investigation have leaked via the Japanese media, where the allegations reported against Mr Ghosn include:

* Nissan paid “huge sums” to provide Mr Ghosn with residences outside Japan, according to a report by NHK, citing unidentified people

* Nissan didn’t disclose that it had provided Mr Ghosn with the homes in its official securities reports to the Tokyo Stock Exchange; the residences, located in Rio de Janeiro, Beirut, Paris and Amsterdam, had “no legitimate business reason” and Mr Ghosn wasn’t paying at least some of the rent

Nissan wasn’t available for comment on the reports when contacted by Bloomberg News, and attempts to obtain a response from Mr Ghosn or his representatives were unsuccessful.

Questions have also emerged about the nature of the allegations and whether Ghosn’s removal was a coup d’etat – something Mr Saikawa was quick to deny Monday evening.

Mr Saikawa did admit that a whistle-blower was responsible for bringing the matter to light, and Japanese media reported Tuesday that prosecutors had agreed to a deal with an unidentified person at Nissan – a non-Japanese executive working in the company’s legal department – under a recently-introduced plea bargain system.

It would be only the second such deal under the system, introduced in June, which reduces or gives immunity for those cooperating with investigations.

Separately, the Asahi newspaper - which was the first outlet to break the news of Mr Ghosn’s arrest - revealed footage of a private jet with the identification number N155AN being boarded by prosecutors shortly after landing at Tokyo’s Haneda airport on Monday evening.

Mr Ghosn is not seen in the video, which show the jet’s blinds being lowered after suited men board the plane. The car titan - who is seen by many as the glue holding the alliance between Nissan, Renault and Mitsubishi Motors together - can be held in custody for up to 23 days without being charged under Japanese law.

The board of Renault, where Mr Ghosn is CEO, will on Tuesday discuss temporarily replacing Mr Ghosn while he remains in detention in Japan, sources familiar with the matter told Reuters.

Nissan has moved to oust Ghosn as its chairman this week after an investigation found evidence of serious financial misconduct, leading to his arrest in Tokyo on Monday. The French government, Renault’s biggest shareholder, called on Tuesday for an interim management structure to be put in place.

Market reaction to the sudden arrest has been swift, with shares of the three partner companies he was involved in tumbling as investors digested the implications for the automotive alliance. Nissan slumped as much as 6.5 per cent to an August 2016 low, while Mitsubishi Motors tumbled the most since April 2016 in Tokyo Tuesday. Analysts were cautious on the impact that the arrest would immediately have on the Japanese carmaker’s day-to-day business, which Mr Ghosn had already ceded much control over after years at the helm.

The broader impact on the alliance remains to be seen, with shares in Mitsubishi Motors, the smaller of the automakers in the trio and itself rescued by Nissan, falling the most since a scandal over emissions came to light in 2016.

1 Coronavirus: We must save lives but we also need to live
2 Avoca warns of redundancies due to coronavirus
3 Over 400 complaints from migrant workers at meat plants lodged with WRC
4 Grounded Aer Lingus pilots develop fix for turnaround glitches
5 Taxi app Free Now blames ‘technical issues’ for driver payment delays
6 Virgin Media vows to withhold sports channels until Eir ‘pays its bill’
7 Companies without tax clearance shut out of Covid wage subsidy
8 Ufurnish: ‘It’s like Skyscanner, but for furniture’
9 Moving in and out of lockdown is a recipe for economic disaster
10 Hozier and Taylor Swift lift Universal Music Ireland’s sales to €20m in 2019
Real news has value SUBSCRIBE