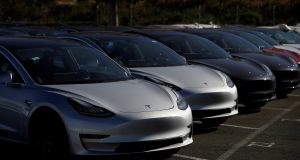 Elon Musk is heading to the world’s biggest market for electric cars. Again. This time around, the Tesla chief executive doesn’t have much choice.

Mr Musk will be in Shanghai at an event with the government on Tuesday and in Beijing on Wednesday. His visit, following Tesla’s move to register a wholly owned subsidiary in China, could provide the solution to the problems the carmaker is combating at its factories, in financial markets and with its biggest buyers.

In the aftermath of the US-China trade spat, Tesla was forced to raise prices by as much as 20 per cent in one of its most lucrative markets, where it only imports cars. Sales in China have slowed, too, declining to 15 per cent of the company’s total sales in the first quarter, before the tariffs were imposed, from 30 per cent in the preceding three months.

While Mr Musk’s pivot to China isn’t surprising, it contrasts with how little he said about Tesla’s second-largest market until very recently. The company opened its first store there in 2013, and annual sales in China first showed up on its income statement in 2014. In filings, on earnings calls and in elsewhere, the entrepreneur was mostly silent on his plans for the country.

This isn’t the first time Mr Musk has been in China, but it’s probably his most important visit. In April 2017, meetings with officials were effectively fruitless. The two sides couldn’t see eye-to-eye.

Since then, Hong Kong has scrapped electric-car subsidies and Tesla sales have plummeted, while talk of a manufacturing facility remained just that.

Tesla has collected a host of parts suppliers in China and elsewhere in Asia, however, and in an earnings call earlier this year, Mr Musk thanked Beijing for its openness to EV manufacturers, and in filings wrote of risks from tariffs on imported parts and on cars exported to China. He said he was planning a massive factory there to make cars, batteries and parts, and noted that his global head of sales, Robin Ren, was “born and raised in Shanghai.”

The timing of the move isn’t surprising. China is the world’s largest car market and the biggest champion of electric vehicles. Its incentives to EV makers include 100 pe rcent ownership of local units, an effective cornering of the battery market and reduced barriers to entry for green autos. The nation will account for almost 60 per cent of global EV sales by 2020, according to JPMorgan Chase estimates. Chinese battery champions have shown manufacturers how to reduce costs, and the government has boosted subsidies for higher-density and longer-range models.

But Mr Musk may not have much choice. Tesla is running out of EV credits in the US (an ironic turn, in view of its recent production difficulties) by probably having exceeded the 200,000-unit cap on subsidy eligibility in early July, according to Colin McKerracher of Bloomberg New Energy Finance. The resulting higher price to consumers may weigh on demand after this year.

Among Tesla’s biggest issues is capital. The carmaker may need more than $10 billion in external funds and debt refinancings by 2020 to deal with current operations, new products like the Model Y and further capacity, including any in China, according to Goldman Sachs Group Inc. A facility in China would require an investment of $4 to $5 billion, Goldman reckons. Capital expenditure for Model 3 production alone is more than $3.2 billion, the firm’s analysts say. These sums are so large that they’re only likely to be available in the debt market.

Another avenue, perhaps a more likely one, is China’s tech giants. Tencent Holdings emerged as a 5 per cent stakeholder in Tesla early last year. The implications of that investment aren’t yet clear - though Mr Musk thanked Tencent for being an “adviser” - but the relationship could evolve, especially if capital is on offer.

As China encourages private industry to up its game in automobiles, the nation may provide a helping hand for Musk. This time, any deal would be on Beijing’s terms. – Bloomberg