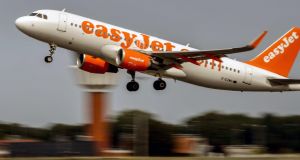 EasyJet will be keen to fill the vacuum left by Monarch at locations including Luton and London’s Gatwick airport. Photograph: Philippe Huguen/AFP/Getty Images

EasyJet Plc is counting on the failure of three rival carriers to help accelerate its expansion into major European markets, bringing a silver lining to a fare war that depressed full-year earnings.

The impact of a weaker pound should also ease, while fuel costs are set to decline, Luton-based EasyJet said Friday. UK rival Monarch Airlines, its neighbour at Luton, went into administration this week, while Air Berlin and Italy’s Alitalia filed for insolvency over the summer.

“The current turmoil in the sector provides EasyJet with opportunities to capitalise on its strong customer proposition and grow and strengthen our positions in Europe’s leading airports still further,” said chief executive Carolyn McCall.

EasyJet has been battling for market share after low oil prices encouraged European carriers to splurge on seating, spurring price drops that contributed to the demise of its rivals. The British company, which has been targeting bigger airports rather than the secondary ones usually favoured by discounters, plans to further step up the challenge in 2018, boosting capacity6 per cent.

Europe’s second-biggest discount carrier is in the bidding for parts of Air Berlin’s short-haul business, which could open up slots at Dusseldorf and Berlin Tegel airports. It is said to prefer those prospects over assets belonging Alitalia, though a reduction in the Italian operator’s footprint might allow it renew a push into markets such as the lucrative Rome-Milan route.

Closer to home, EasyJet will be keen to fill the vacuum left by Monarch at locations including Luton and London’s Gatwick airport.

Credit Suisse analysts led by Neil Glynn said the company was “well positioned to structurally improve returns by absorbing 30 aircraft from Air Berlin and some or all of Monarch or its slots”.

EasyJet shares traded 1.6 per cent lower in London after the carrier said pre-tax profit for the year ended September 30th was between £405 million and £410 million, indicating a decline of at least 17 per cent from fiscal 2016.

McCall, who leaves at the end of the year to run ITV, said EasyJet had a strong summer, especially on routes to beach destinations, providing “positive momentum”.