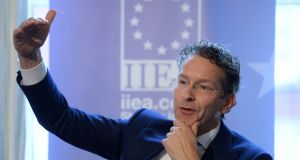 The former finance minister of the Netherlands, Jeroen Dijsselbloem, moved to “phase out” the scheme in 2015. File photograph: Dara Mac Dónaill

The Dutch state railway, Nederlandse Spoorwegen (NS), has moved to formally wind up a Dublin-based company structure that had been the subject of fierce controversy in its home country over tax avoidance.

Its Dutch parent group has appointed restructuring practitioner Eamonn Richardson of KPMG as liquidator to two Irish train-leasing companies that were at the heart of the long-running tax avoidance scheme that saved the group an estimated €270 million in taxes in the Netherlands over a decade.

A declaration of solvency filed for the Dublin holding company showed it has assets of more than €432 million as it enters liquidation, and liabilities of only about €500,000.

NS announced in the Netherlands this week that the Irish subsidiaries had sold their last assets and ceased operating. Its final tranche of 54 trains were sold to a German operation with links to NS.

Following a storm of controversy in the Dutch parliament about the Irish tax avoidance practices of such a prominent state company, the former finance minister of the Netherlands, Jeroen Dijsselbloem, moved to “phase out” the scheme in 2015.

The Irish companies had been involved in buying trains and leasing them back to the railway operator in its home state. The system was beneficial for NS because the rate of corporation tax in this State is half the 25 per cent rate in the Netherlands.

NS still operates another Irish-based train leasing company, Disa Assets, which is linked to Abello, a subsidiary of the Dutch company that operates mainly in Germany.

NS has previously told The Irish Times that it had an agreement with the government of the Netherlands that it could still utilise tax-efficient leasing structures to make it more competitive when applying for rail concessions abroad.

The Dutch finance ministry previously argued that the situation regarding NS Financial Services was “totally different” because NS gets to operate rail concessions in its home country without tender.