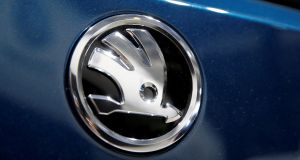 Skoda parent company VW has paid out more than €27bn in penalties for using illegal software to disguise excessive levels of pollution from its diesel cars. Photograph: Reuters/Axel Schmidt

A district court in Prague has ruled that Czech owners of Skoda and Volkswagen cars qualify for 533 million crowns (€20.8m) in compensation linked to VW’s diesel emissions scandal. The suit was filed by 2,435 people. The decision is open to appeal.

Volkswagen admitted in September 2015 that it had cheated US diesel emissions tests.

“It is a breakthrough in the European branch of the affair,” a Czech news website, seznamzpravy.cz, quoted the customers’ lawyer Frantisek Honsa as saying. “We managed to push through the same compensation as in the United States. ”

VW has paid out more than €27 billion in penalties for using illegal software to disguise excessive levels of pollution from its diesel cars, triggering a global regulatory clampdown.

Seznam said that the court ruled to uphold the request for compensation because Skoda parent VW missed a deadline to provide its position to the court.

In February, a German court ruled that batted down VW’s arguments that its cheating software was legal under EU law and therefore the company was not required to compensate affected customers.

Some 400,000 customers have signed up for a mass suit against the car-maker.

VW has struggled to move past the three-year-old scandal. In 2015 it admitted to rigging diesel cars to detect test conditions and lower emissions levels to legal limits, while polluting more on the road. The crisis involved as many as 11 million diesel cars worldwide. Inquiries by German prosecutors into the root cause of the engine rigging continue.

Skoda Auto, VW, the district court in Prague and the lawyer representing the customers had no immediate comment. – Reuters, Bloomberg