Draghi’s government to resume talks with EU on Alitalia 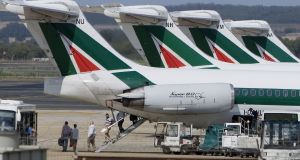 Passengers disembark from an Alitalia jet at Fiumicino Airport in Rome.

Italian prime minister Mario Draghi’s government is set to resume talks with European Union authorities on the future of cash-strapped Alitalia, in an early test of his relationship with Brussels.

The European Commission is seeking a radical overhaul of the airline, which has endured losses for years. Discussions on a restructuring are entering a crucial phase, with Draghi’s ministers set to speak with EU antitrust chief Margrethe Vestager on Friday morning.

The new premier starts out with good standing in Brussels, given his past role as president of the European Central Bank. He has so far taken a hands-on approach, meeting with the development, transportation and finance ministers this week to refine the plan for Alitalia.

But the commission, which oversees rules limiting state aid within the bloc, isn’t convinced that Italy’s current proposal can offer a better outcome than previous projects that cost taxpayers money and failed to return Alitalia to health.

The online meeting with Vestager will be pivotal in assessing how much support Brussels will allow Italy to give to the airline.

“Draghi is facing a complex challenge in resolving the Alitalia saga,” said Andrea Giuricin, an aviation expert at the University of Milano-Bicocca. The premier’s experience with the EU “could help to find a market solution, but the runway is very narrow.”

Alitalia, under the auspices of newly formed Italia Trasporto Aereo SpA, or ITA, is rushing to review its 2021-2025 business plan following requests for clarification from the EU.

Competition authorities want to assure “economic discontinuity” with the old Alitalia, which went bankrupt in 2017 and has been under state administration ever since. So far, it’s cost the government €1.3 billion ($1.56 billion) in bridge loans, plus some €300 million in interest.

The EU has been critical of Italy’s plan to hand ITA Alitalia’s aviation assets, while keeping control of handling and maintenance operations. ITA would then seek an industrial partnership with a European carrier – going beyond a simple commercial agreement – according to the new airline’s CEO, Fabio Lazzerini.

Vestager has said that the new entity must demonstrate a clean break with Alitalia, or risk being forced to pay back loans and other state aid. ITA needs to show it has a “viable” business model, she told reporters in February, and will need to buy assets or the brand at market prices. She also wants Alitalia to give up valuable airport takeoff-and-landing slots.

In a January letter to Italy, EU competition regulators said the Alitalia brand should not be retained and raised doubts about hiring procedures at ITA. They also questioned whether the new company’s management faces a legal obligation to rehire former Alitalia employees, according to the document seen by Bloomberg.

Under the updated plan under review, the carrier’s work force may be reduced to less than a half of current level, making integration with a bigger European carrier a near certainty, according to a person familiar with the matter. The airline can’t feasibly operate with less than 4,000 to 5,000 staff and about 45 planes, said the person, who asked not to be identified with the situation in flux.

“A standalone strategy looks very difficult for Alitalia and the integration into a bigger group is the only chance for survival,” said Giuricin of the Milano-Bicocca university.

Before the coronavirus pandemic, Deutsche Lufthansa AG said it was interested in investing in Alitalia, provided the Italian government restructured the carrier first to trim costs. The German airline’s CEO, Carsten Spohr, said Thursday that he’s interested in a commercial partnership, though terms of Lufthansa’s €9 billion bailout prevent big acquisitions.

“Italy remains our second-most important foreign market after the US,” Spohr said at the company’s annual press conference in Frankfurt. – Bloomberg

9 How much can Ireland borrow to get through this Covid-19 emergency?