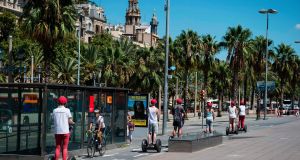 Segway tours and electric scooters were banned from the Old City and the seafront, in a move that will be applauded by most citizens.

It was once dubbed the capital of cool, but these days visitors to Barcelona can expect a quite frosty welcome as the city’s love affair with tourism comes to a bitter end, with hooded youths spraying a tourist bus with slogans, and strike chaos at the city’s airport. This week Segway tours and electric scooters were banned from the Old City and the seafront, in a move that will be applauded by most citizens.

The scooter and Segway issue is just one aspect of a widespread view that the city is becoming a theme park, run in the interests of tourists rather than residents, and that soaring rents, driven up by Airbnb and other platforms, are forcing residents out of their homes.

This has been a long time coming, but to many residents the tipping point was reached last year when a record 75 million foreign tourists visited Spain, 10 million more than in 2015. And the area with more visitors than any other – 17 million – was Catalonia.

Last year 8.3 million people stayed in hotels in Barcelona, and a similar number in legal or unlicensed apartments in the city. Add in day trippers from cruise ships and elsewhere in Spain, and that’s 30 million extra people on the streets of Barcelona.

In 1990 the city saw 1.7 million tourists, and in 2012 7.4 million. Since 2012, the massive increase in holiday apartments has doubled the city’s bed capacity, with around 15 million people spending one or more nights in Barcelona. Throw in the day trippers from cruise ships and other parts of Spain and the total number of visitors rises to 30 million.

Barcelona is a relatively small city, with 1.6 million inhabitants, and the tourists congregate in an even smaller area – the Old City, seafront and Sagrada Familia.

In a survey by a local newspaper last year, tourists’ main complaint about Barcelona was that there were too many tourists.

Ever since the 1992 Olympic Games transformed Barcelona from a grey, provincial city into one of Europe’s top tourist destinations, successive city councils have treated it as a cash cow, giving the tourism and, above all, the hotel industry carte blanche to milk it, heedless of growing disquiet among residents. When incumbent mayor Ada Colau stood for office in 2015 it was the first time tourism had been presented as a problem on a political agenda.

To the chagrin of developers and hotel chains, Colau’s government put a moratorium on new hotels (though many were already in the pipeline) and holiday apartment licences. Airbnb was made to withdraw thousands of unlicensed flats from its website.

No one is calling for an end to tourism, which accounts for about 17 per cent of the city’s GDP, and directly employs some 90,000 people. But there is a sense that it has come to dominate and distort an ancient and once industrially diverse city.

Today, residents of the seafront area of Barceloneta, which has been particularly overwhelmed, will be the latest to raise their voices. They are holding a demonstration on the beach under the slogan Barceloneta diu prou! ( Barceloneta says stop!) Or to put it another way: enough already.