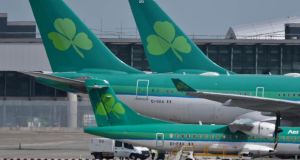 Eleven members of the Aer Lingus board will decide whether to recommend any offer from International Consolidated Airlines Group to its shareholders and thus pave the way for a sale. Photograph: Artur Widak/PA

Ultimately, 11 members of the Aer Lingus board will decide whether to recommend any offer for the company from International Consolidated Airlines Group to its shareholders and thus pave the way for a sale.

Outgoing chief executive Christoph Mueller has absented himself from the process, as he stands to gain from a sale, while trade unionist David Begg’s extended term ended just last week. The remaining 11 people are:

With Mueller’s departure looming, Barrington has taken on executive responsibilities along with chairing the board. Well known in the aviation industry, he is chief executive of Fly Leasing, the New York-listed, Irish-based aircraft financing business, which has assets of about $3.7 billion. Barrington worked in a number of senior roles in GPA, the Irish aircraft leasing pioneer founded by the late Dr Tony Ryan. He was appointed president of GE Capital Aviation Services when the US giant took over GPA in 1993.

Bot joined the board last September on becoming the airline’s chief financial officer last year. He moved from the same role with logistics group TNT Express in the Netherlands, where he was also a member of the board. Before TNT he spent 13 years with McKinsey & Company, the global management consultancy.

O’Connor joined in March and has a long background in aviation. He is co-founder and chief executive of Airtel ATN, which supplies data communication systems to the aerospace industry. He has more than 20 years of experience in aeronautical telecommunications networks. A computer scientist, he began his career with System Dynamics and worked with CACI and Retix before co-founding Airtel ATN in 1998.

Slattery is executive vice president of US Bank State Street. Before that he was head of risk Deutsche Bank’s asset management division. Slattery has intimate knowledge of the State sector. He worked for the Central Bank for 23 years and helped to establish Dublin’s International Financial Services Centre. He has since served on bodies such as the National Competitiveness Council.

A one-time insolvency specialist with KPMG and former governor of the Bank of Ireland, Crowley has long list of directorships on his CV. He joined the Aer Lingus board six years ago. He is also a director of the Economic and Social Research Institute, Realex Payments, the Gate Theatre and Middletown Centre for Autism and cement maker, Ecocem. In the past he served on the board of Elan and the Michael Smurfit Graduate School of Business.

Brewer joined the Aer Lingus board in January 2010. He is also a director of Allegiant Travel, a north American travel and airline group. He served as president and chief executive of Air Canada from 2004-2009 and is credited with simplifying its fare structures and turning around its sales and distribution operations. Before that, he worked for United Airlines, where he played a key role in establishing Star Alliance.

As a former chief executive of Ferrovial Airports, the Spanish owner of Heathrow, Villén presumably brings some useful insights to any meetings discussing IAG’s offer for Aer Lingus. Not only did he lead that company but he also held internal board positions at the company that is now Heathrow Holdings. His career spans private equity, utilities and pharmaceuticals. He has a degree in industrial engineering from the University of Madrid, and also attended Columbia and Florida universities in the US, where he earned a Fulbright scholarship.

Northridge is a former chief executive of tobacco group Gallaher and oversaw its sale to Japan Tobacco International in 2007 and 2008. He stayed on with the business after the take over to supervise is integration. He is also on the board of Paddy Power, where he has been a director since 2003 and is now chairman. He is also chairman of retail group Debenhams and is a director of Inchcape. He has also served on the board of travel group Thomas Cook.

About the same time that she joined the Aer Lingus board in March 2014, Gilvarry came to the end of her second term as managing partner of commercial law firm Mason Hayes & Curran. She specialises in litigation, particularly dispute resolution in contentious partnership and shareholder issues. She also advises large companies on governance issues. She is a member of the council of the Economic and Social Research Institute and State body Fás.

A technology investor and executive in Silicon Valley, California, Hartnett is well known for banging the drum for the opportunities that his sector offers the Republic. He is founder and chief executive of SVG Partners, an investment and adviser firm. He has held senior posts with Palm, Apple, Digital and Wang. He is on the board of University of Limerick Foundation and is president of the Irish Technology Leadership Group.

Shaw is a transport industry specialist who has worked in both the private and public sectors. She is chief executive of High Speed 1, the railway between St Pancras in London and the Channel Tunnel that connects with the high-speed routes between London and Paris and London and Brussels.

She held a senior role at FirstGroup where her responsibilities included the Irish market. Previously she worked in senior positions in the British Strategic Rail Authority and the Office of the Rail Regulator.