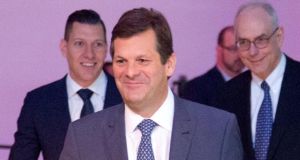 Bombardier executive chairman Pierre Beaudoin, who is giving up management responsibilities after an outcry over compensation. Photograph: Reuters/Christinne Muschi

Bombardier, the Canadian maker of aircraft and trains, reported better-than-expected quarterly results on Thursday. However, the firm’s executive chairman, Pierre Beaudoin, is giving up management responsibilities after an outcry over compensation. He will continue to lead the board.

The firm bought Belfast aircraft manufacturer Short Brothers in 1989 and operatees a production facility in Belfast.

Beaudoin, a scion of Bombardier’s founding family which controls the company through a dual-class share structure, will continue as non-executive chairman, despite calls from several key shareholders for an independent director at the group’s helm.

It follows a decision by the company in March to award its top five executives and chairman raises of up to 50 per cent a few months after announcing thousands of layoffs and receiving more than $1 billion in government funding. The move sparked widespread protests and a dressing down by Canadian prime minister Justin Trudeau.

Beaudoin later agreed to forgo his raise while other executives deferred them. – (Reuters)