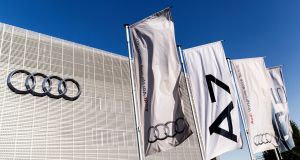 Audi has discovered emissions-related problems with a further 60,000 cars, it said on Tuesday, dealing a fresh setback to parent Volkswagen more than 2-1/2 years after it first admitted to cheating US diesel exhaust tests.

Audi said it had stopped deliveries of A6 and A7 models with a certain type of diesel engine after finding a previously unidentified problem with emissions software. It did not give details of the problem.

A person familiar with the matter said 60,000 cars would have to be recalled for a software update, taking the total number of vehicles with Audi engines to be recalled over the “dieselgate” emissions scandal to more than 900,000.

Audi’s parent firm, Volkswagen Group, has recalled millions of vehicles in total and paid out billions of dollars in fines since it admitted in September 2015 to using illegal “defeat device” software that masked the level of pollution emitted by its diesel engines.

Having announced a multibillion-dollar investment in electric vehicles, and a new chief executive only last month, Europe’s largest carmaker has been looking to move on from the biggest business crisis in its history.

Audi’s announcement came a day before its annual shareholder meeting, where it was hoping to focus on its electric car plans.

The German transport ministry said earlier on Tuesday that the KBA motor vehicle authority had summoned Audi for a formal hearing about its A6/A7 diesel models.

“The KBA has requested a hearing on suspicion the Audi V6TDI A6/A7 models have been fitted with an illegal defeat device,” the ministry said in a statement.

German magazine Der Spiegel was first to report that Audi had discovered the problem.

Prosecutors in Munich, which in the past have raided Audi’s headquarters and are investigating 18 of its current and former employees, said on Tuesday they would widen their probe to include the affected A6/A7 models.

However, Evercore ISI analyst Arndt Ellinghorst did not see a big financial impact from the latest setback.

“As painful, annoying and incomprehensible as these issues are, they will unlikely trigger massive incremental legal risks. Best guess, this could trigger €15-30 million in additional costs which should be covered by VW’s existing diesel provisions,” he said in a note.

Audi said it had informed the US monitor tasked with overseeing VW’s post-dieselgate reforms of its latest problem, but added no cars in the United States were affected by it.

Audi said in November 2015 - two months after the admission of wrongdoing by VW - that defeat device software was installed in about 85,000 cars in the United States fitted with its larger engines. – Reuters