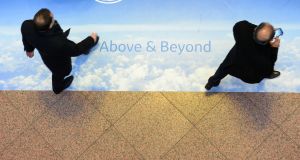 Current trends risk creating a bubble in aircraft values, an industry analyst warned at a conference in Dublin on Wednesday. Adam Pilarski, senior vice-president of aviation consultancy Avitas, told the annual Global Airfinance Conference that his company’s view of the aircraft market was that it has yet to reach a peak.

Nevertheless, he warned that problems, including the movement against globalisation evidenced by the UK’s Brexit vote and Donald Trump’s victory in the US presidential election, have heightened the risk of a “harsh landing” in aircraft values.

This could hit the Republic’s aircraft leasing industry, which supports thousands of jobs in Dublin and Shannon and generates more than €20 billion in transactions every year.

Mr Pilarski noted that, historically, new aircraft orders from manufacturers have more or less matched the rate of new aircraft supplied to airlines. However, he pointed out that new orders are now running at almost twice the rate of deliveries. He said that in order to take up all the aircraft on order, airlines would have to sustain current growth over the long term. But there was a significant risk that this would not happen.

He said that the last time orders and deliveries were so out of sync was in the late 1980s, and that the subsequent bursting of that bubble led to the collapse of GPA, the leasing giant founded by the late Tony Ryan.

At the same conference, Norwegian Air Shuttle’s chief financial officer, Frode Foss, predicted that the group’s Irish long-haul subsidiary would double in size by the end of the year. The Scandinavian company is using its Irish subsidiary, Norwegian Air International, to launch low-cost long-haul flights between Europe and the US and Asia. Mr Foss said that the airline’s fleet was likely to grow from 20 aircraft to almost 40 by the end of this year.

US authorities recently approved Norwegian Air International’s application for a licence to fly there, and the carrier will begin services between Cork and Boston this summer.

“We are growing our long-haul business and it is very profitable,” Mr Foss said.

Both Mr Foss and Ryanair chief financial officer Neil Sorahan confirmed that the two companies are in talks about a deal that could see them feeding passengers to each others’ services.

“It is no secret that we have been talking to each other for some time,” Mr Sorahan said. “It makes sense that we would have some kind of feed-out into the future.”

Ryanair will have taken delivery of 52 new Boeing 737s by the end of its current financial year on March 31st and it is due to receive a further 50 over the succeeding 12 months.

Mr Sorahan confirmed that it planned to use its own cash to pay for the new planes.

“If anything, we are short of aircraft at the moment,” he said, adding that this was a limiting factor on growth.

Etihad, which flies twice a day between Dublin and the airline’s hub in Abu Dhabi, owns stakes in a number of European rivals, including Air Berlin and Alitalia, in which it invested when there were fears that the Italian flagship carrier could fold.

Mr Hogan called for rules restricting non-EU shareholders from owning more than 49 per cent of any EU airline to be changed.

“There needs to be a relaxation of those rules if airlines are to access the investment that they need,” he said.

Etihad recently provided $100 million (€94 million) to Alitialia in the form of bonds. It could not buy further shares in the airline as it already owns 49 per cent of it.