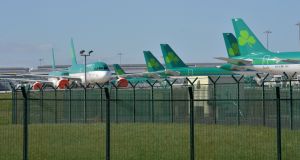 Aer Lingus has cut a number of jobs due to what the airline described as the “decimation in demand for travel” during the coronavirus pandemic.

With almost all business and leisure travel suspended, and global commerce greatly impacted by the spread of coronavirus, the IAG-owned carrier confirmed that it had “deferred” a number of “planned appointments”.

With the pandemic placing the airline industry under unprecedented pressure, airlines around the world have been cutting jobs and pay in an effort to stay in business.

It would not confirm how many people had been affected by the move. In a statement, the company said it had “communicated to a number of fixed-term contractors in March that their planned appointments as permanent seasonal contractors was being deferred due to the Covid-19 crisis”.

“Given the ongoing crisis, the decimation in demand for travel in the immediate term and the uncertainty regarding future travel demand thereafter, these individuals have now been informed that there is no operational requirement for their roles going forward.”

Aer Lingus has already imposed temporary pay cuts on staff, with the company last week writing to workers to tell them their pay would be cut to 30 per cent of normal levels from June 21st to August 29th, RTÉ News reported last week.

Ryanair has also said it will cut 250 jobs across its bases in the Republic, the UK, Spain and Poland.