Time called on plan to have Big Ben bong for Brexit 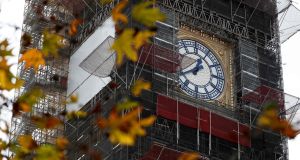 Big Ben restoration: a £500,000 plan to have the clock “bong” when the UK leaves the EU on January 31st has been dashed by Downing Street. Photograph: Adrian Dennis/AFP/Getty

The usual suspects in the UK were in full outrage mode this week as, first, Union Jack flags were removed from desks in the European Parliament, and, then, moves to have Big Ben chime on Brexit day were stymied.

Brexit Party leader Nigel Farage was – shockingly – particularly vocal on both of these important issues. He accused the government of being “embarrassed” by Brexit for its unwillingness to shell out £500,000 for Big Ben, which is currently undergoing refurbishment.

UK prime minister Boris Johnson gave his blessing to the idea of crowd-funding the cash. “We’re working up a plan so people can bung a bob for a Big Ben bong, because there are some people who want to,” he said.

However, the House of Commons commission said it would not accept the money as to do so would be inconsistent with “principles of propriety and proper oversight of public expenditure”.

Lindsay Hoyle, the speaker of the Commons, also pointed out: “You are talking about £50,000 a bong. We also have to bear in mind that the only people who will hear it will be those who live near or are visiting Westminster.”

Meanwhile, companies in Northern Ireland are continuing to stockpile as January 31st approaches, and a significant percentage of companies view the Brexit deal as “detrimental to business”, a new survey from the Northern Ireland Chamber of Commerce stated.

In the Republic, recently-installed European Commission president Ursula von der Leyen was in town to put paid to any fears that the new commission could soften its stance on the North. A hard border in Ireland will “never, ever come back”, she said.

At the same time, EU commissioner for trade Phil Hogan warned Britain that negotiations with the United States over a trade deal post-Brexit will be more difficult than expected. “It won’t be as easy as the United Kingdom thinks,” he said in Washington, DC.

Staying with trade, the US and China finally signed a “phase one” deal, suggesting a truce in the trade war between the world’s two largest economies that has been simmering since 2018. Markets were relieved.

China committed to purchasing $200 billion (€180 billion) more American goods over two years. Existing US tariffs on about $360 billion of Chinese goods will broadly remain, although the US has halved 15 per cent tariffs on $120 billion worth of those products.

Back home, the political establishment is in general election mode following confirmation of a vote on February 8th. Both Fine Gael and Fianna Fáil pledged to cut taxes and increase spending.

Minister for Finance Paschal Donohoe indicated that Fine Gael’s tax-cutting plan would see the party commit to increasing the threshold for paying the higher rate of income tax from €35,000 to €50,000 over the five years of the next government.

Taoiseach Leo Varadkar insisted the measures could be paid for using recent budget surpluses, but one thing to keep an eye on could be the annual rate of inflation, which almost doubled from 0.5 per cent in 2018 to 0.9 per cent last year.

Every start-up dreams of one day selling their company to some behemoth for a ridiculously high price, and that dream was realised by one company this week after Google paid a reported $160 million for Dublin tech firm Pointy.

The deal will deliver an $80 million-plus windfall for founders Mark Cummins and Charles Bibby who hold just over 51 per cent of the business. Former Ireland rugby star Jamie Heaslip will also see a substantial return on his investment in the business.

It was a totally different sort of a week for British airline Flybe, which narrowly avoided collapse after the UK government told the airline it would review air passenger duty. The threat of collapse had raised fears for flights to Britain from several Irish airports.

Flybe’s chief executive Mark Anderson said the company was in talks with the UK government around a loan but insisted it was not a bailout. That led to a flurry of criticism from IAG chief Willie Walsh and Ryanair boss Michael O’Leary.

Walsh described the move as a “blatant misuse of public funds” with the taxpayer effectively picking up the tab for mismanagement of the airline, while O’Leary said other airlines “must be treated the same as Flybe if fair competition is to exist”.

Meanwhile, Greencore shareholders were urged by advisory firm ISS to vote against a €315,000 pension contribution for its chief executive Patrick Coveney that would equate to 35 per cent of his salary.

Elsewhere, Irish homebuilder Cairn Homes said revenues rose 29 per cent to €434 million in 2019 as it put in a strong sales performance, and announced it would increase its share buyback programme.

Data protection laws back in the headlines

The spotlight was back on Ireland’s data protection compliance this week after it emerged that authorities in Europe issued fines worth a combined €410 million to organisations last year for violations but none originated in the Republic.

The absence of any fines was particularly notable with the Republic being home to many of the world’s biggest technology companies.

That said, the Data Protection Commission is understood to be in the final stages of its investigation into WhatsApp over possible breaches of EU data privacy rules, with a draft decision expected to be circulated to other authorities to consider within weeks.

Separately, consumer groups called for an immediate investigation into online advertising companies following allegations there were “systemic” breaches of General Data Protection Regulation (GDPR) involving some of the most popular mobile apps.

Data on people’s health, sexual orientation, location and interests were among that being shared by the apps, a situation that consumers may not be aware of, a new report said.