Theresa May puts her finger on the Brexit trigger 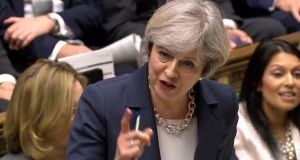 British prime minister Theresa May has her finger on the trigger after the so-called Brexit Bill this week cleared all hurdles in the Houses of Parliament, opening the door for the United Kingdom’s exit from the European Union and the start of formal divorce negotiations.

As Government Ministers on this side of the Irish Sea were off on their annual St Patrick’s Day trade missions, the Department of Foreign Affairs published a paper detailing the Government’s “priorities and concerns” ahead of D-Day.

Brexit: Ireland’s Priorities noted that the small size of our domestic market means exports of goods and services are “far more economically significant” compared with other states.

Any restrictions on trade will have “profound impacts” on all-island relations, it said. Given the composition of Irish goods exports to the UK, the Republic would be “severely impacted” by the imposition of tariffs by the UK.

Among the “priorities”, the Government said it was engaging with companies to help them adapt to currency fluctuations as well as to support market diversification.

A new trade and investment strategy will be backed up by an “intensified programme” of trade missions. Furthermore, almost 50 new staff are to be deployed to enterprise agencies to “support firms to enter new markets and to attract new investment”.

Certainly, there is work to be done. Niall Gibbons, chief executive of Tourism Ireland, said there will be 4 per cent less UK capacity coming into Ireland this season. “That is a concern no matter what way you look at it,” he said.

It’s not all doom and gloom though, as a group of economists expressed more optimistic sentiments in terms of the economy’s prospects.

The economists, who were polled by Bloomberg, now say the Irish economy will expand 3.5 per cent in 2017, up from 3.1 per cent previously, and more hopeful than the Central Bank’s 3.3 per cent estimate released in January.

While the Government tries to calm exporters and those other industries likely to be worst hit by Brexit, it is also continuing to flutter eyelashes at multinationals looking to jump ship before the water starts coming in over the side.

The State even complained to the European Commission that it is being undercut by rival centres competing for business. Last week, US insurer AIG became the biggest group so far to pick Luxembourg as its EU base.

“Other cities in Europe are being very aggressive in trying to win business,” Eoghan Murphy, the junior minister in charge of promoting Dublin’s financial centre, said. Perhaps he had a point, with Frankfurt lobbyists reportedly saying in private that the Irish accent makes local English “incomprehensible”.

Murphy added: “We have always said . . . we would not be predatory . . . that we are not interested in brass plating.” Nevertheless, Dublin has received 80 inquiries, according to IDA Ireland.

The Central Bank was also keen to sing from the right hymn sheet. Ed Sibley, director of credit institutions supervision at the bank, said officials are working hard to ensure there is no “regulatory race to the bottom” in terms of attracting firms.

The latest boon in that regard came from Bank of America as it referred to Dublin as its default destination for a new EU hub if the UK loses access to the single market. “Dublin is an emergency, a default option that the bank has,” said a senior executive.

Separately, Bank of China, the 64 per cent state-owned bank, applied to set up an Irish branch of its UK operation to capitalise on growing commercial links between this State and the world’s second-largest economy.

Ardagh executive chairman Paul Coulson was in the Big Apple to ring the opening bell of the New York Stock Exchange – a tradition that dates back to the 1870s – as his glass and metals company took the plunge a day earlier than expected on its IPO.

Shares soared as much as 20 per cent as the flotation valued the company at $5.32 billion (€5 billion). Ardagh priced its initial public offering of 16.2 million shares, equivalent to a 6.9 per cent stake, at $19 each on Tuesday night.

The shares jumped as high as $22.74 within hours, closing 18.2 per cent stronger at €22.465. Coulsen later said he moved the float forward by a day to avoid market volatility as the US Federal Reserve prepared to announce its latest interest rate decision.

Indeed, the Fed, as expected, raised short-term interest rates for the third time since the financial crisis. It raised the target range for the federal funds rate to 0.75 per cent to 1 per cent.

There was a jobs blow in the South as cosmetics giant Coty confirmed it is closing its Nenagh plant. The first layoffs among the staff of more than 200 are expected in October.

Workers at the former Procter & Gamble plant were told operations will be phased out between now and the end of 2018. “We feared the worst, but hoped for the best,” said Denis Finnerty, vice-president of the local chamber of commerce. “This is far worse than we thought.”

In addition, Coca-Cola announced that about 50 jobs in its Irish business will be lost under a reorganisation that will see it centralise certain functions across Europe. Staff at the company’s Southgate plant in Drogheda are those most likely to be affected.

Minister for Finance Michael Noonan was forced to defend his position after the Public Accounts Committee (PAC) ruled it was not “procedurally appropriate” for him to meet a large US investment firm on the eve of its bid for the Project Eagle property portfolio.

The PAC started investigating the sale of the Project Eagle loans following a report from the Comptroller and Auditor General (C&AG), which said Nama could have lost about £190 million (€216 million) on the £1.2 billion (€1.4 billion) sale.

In its report, the PAC said: “It was not procedurally appropriate for the Minister for Finance to meet with senior Cerberus representatives the day before the Project Eagle closing date. That could have given the perception that Cerberus was benefiting from preferential treatment.”

Members of the committee, including chairman Sean Fleming, were unhappy that Noonan failed to mention his meeting with Cerberus during five hours of testimony to the committee in October.

Noonan, however, denied any wrongdoing. “I refute absolutely the validity of any suggestion that I or my officials acted inappropriately in meeting with Cerberus in March 2014,” he said.

In terms of the actual deal, the PAC said the sale process was “seriously deficient” and that Nama had failed to demonstrate that it got “value for money” for the State.

Nama rejected the criticism that an alternative sale process would have delivered a better outcome for taxpayers. “Deferring the sale would not have produced a better financial outcome,” it said.

“The commercial reality is that the Northern Ireland property market and many regional markets in northern Britain, where many of the portfolio’s underlying assets are located, have been challenging and are likely to remain challenging for the foreseeable future.”

1 Corona beer firm reeling after 8% slide due to coronavirus
2 How well paid do you think you are? Here’s how to work it out
3 Life as a Facebook moderator: ‘People are awful. This is what my job has taught me’
4 Wealthy investors’ legal challenge against Revenue fails
5 Flight attendent seeks High Court injunction against Aer Lingus
6 AIB to sell more than 500 ATMs to Brink’s
7 Coronavirus and the etiquette of working from home
8 Wall Street hammered on coronavirus fears while Dublin dips 4%
9 Bank leaked my loan request to family who tried to rip me off
10 Accumulated profits at Marian Finucane firm exceeded €830,000
Real news has value SUBSCRIBE