Alan Joyce’s advice to airlines after his Qantas success? Adapt

Dubliner on track to deliver €1.5bn in cost savings at the Australian airline 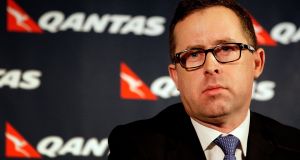 Dubliner Alan Joyce, who is steering Qantas Airways through a successful three-year transformation, has one word of advice for other airlines - adapt.

While Mr Joyce’s restructuring at Qantas is set to deliver A$2.1 billion (€1.5 billion) in cost savings by the end of June, the marquee Asian airline just recently set out on a similar course, vowing to improve returns and operational efficiency.

“It is a lesson to all carriers around the globe to adapt and change,” Mr Joyce said in a Bloomberg Television interview on Thursday in Hong Kong. “That’s the way you survive.”

Qantas chief executive Joyce has cut thousands of jobs, deferred aircraft, retired older planes, and dropped unprofitable routes while partnering with ex-nemesis Emirates to help stem losses on international routes. Qantas in August announced its first dividend since 2009 and handed bonuses to 25,000 workers following a record annual profit. He has also targeted to save A$400 million annually in cost and revenue benefits.

Qantas shares have more than tripled in value in the past three years, while those of Cathay have declined 26 per cent in the same period.

Start at the top

While Cathay has given scant details of its business revamp, it has said changes “will start at the top” and it would eliminate some positions. Key changes take effect by mid-year.

At a press conference in Hong Kong on Wednesday, chairman John Slosar and chief executive Ivan Chu said they will share more information once the process is complete.

“We do believe there’s structural piece to it,” Mr Slosar told reporters on Wednesday. “We’ve got to become better, lower cost, more agile in terms of how we approach the market.”

Cathay’s passenger yields - the money earned from flying a traveller for one kilometre and a key measure of profitability - dropped 9.2 per cent in 2016, while cargo yields declined 16 per cent. The Asian carrier said the operating environment in 2017 would remain challenging, while Jefferies Group said losses could continue in the current year.

“Airlines go through these phases - we’ve gone through it a couple of times in our history,” Mr Joyce said in the interview.

“They are going through it now. Cathay have a good management, have got a great brand and a great franchise. Everybody needs to make sure that they allow Cathay to do the right thing and change their business.”