The chicken, the egg and the Greek bailout

The immediate job, for Greece, is to restore some sense of stability 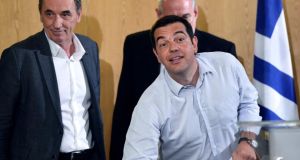 Greek prime minister Alexis Tsipras has much to do to meet the target for this year of a 0.5 per cent primary deficit. Photograph: Louisa Gouliamaki/AFP/Getty Images

The bailout programme for Greece leaves the government little room for manoeuvre. In section after section it dictates what must be done if bailout funds are to be released, covering everything from diesel tax on farms to liberalising bakeries. But how on earth will Greece achieve the growth targets which underlie the plan while also extending austerity ?

With the domestic economy hit hard by the tax and spending measures, where will this growth revival come from? In Ireland’s case the domestic economy was hit hard, but an eventual return to growth was led by exports. Greece has a much smaller and less developed export sector.

The budgetary measures in the plan will hit growth quickly by cutting people’s spending power and reducing government spending. The structural measures, on the other hand, such as freeing up markets for generic drugs and reforms in labour and energy markets, can boost growth, but only over a long period.

Then there are the budget targets. Prime minister Alexis Tsipras already has a lot of work to do to meet the target for this year of a 0.5 per cent primary deficit (the deficit before debt repayments).

The immediate job, of course, is to restore some sense of stability. This will require a recapitalisation of the banking sector and restructuring to put it back on a sound footing. It will also need a significant advance of funds to the government. We are told that Greece will have to implement a load of reforms before any significant cash it paid over. There is a chicken and egg situation here which needs to be sorted out quickly if this bailout if even to get beyond first base.