Win a stay at The Imperial Hotel, The Heritage and The River Lee 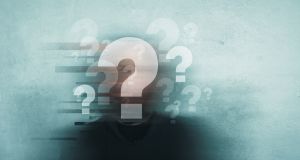 1. Which global travel platform made a spectacular debut this year, with an IPO value surging past $100 billion?

2. Which Irish woman was this year chosen as the ACCA’s global deputy president?

3. What do the acronyms CRSS, EWSS and PUP stand for?

4. Who won The Irish Times Business Person of the Year Award in association with KPMG?

5. Debenhams closed its Irish stores earlier this year. Which long-established Irish department store group did it acquire when it first made its push into the Irish market?

6. The World Economic Forum’s main meeting will relocate next year from Davos in Switzerland to which other city?

7. What level of fine did the Data Protection Commission hit Twitter with for a GDPR breach? 8. Which Irish property developer this year got the green light from Nama to lead the development of the former Irish Glass Bottle site in Ringsend?

10. Who won the EY Entrepreneur the Year award?

12. Who are the four people pictured?

13. Which major French retailer opened a €13 million flagship store in Ireland in June, in spite of the impact of Covid-19 on the economy?

14. As of December 22nd, which Covid-19 vaccines had been approved in the United States for distribution?

15. What value has been placed on Irish listed forecourt retailer Applegreen by the bid offer put to the company in December?

16. How much was Stripe valued after it raised a further $600 million in April?

17. What chief executive of a major European bank resigned in February in the wake of an executive-spying scandal at the company?

18. What 118-year-old US department store chain filed for bankruptcy in May and emerged from court protection from its creditors with new owners in early December?

19. Who was named as insurer FBD’s next chief executive, a role he will take up in January?

20. How many billions of euros did Nama raise in the long-term bond markets this year?

21. What is the name of the company that agreed in November to take over CPL Resources?

22. Tesla overtook what company to become the world’s most valuable car group in the world in July?

24. Which Irish hotel got into hot water with planners and historians when it removed statues from in front of its property?

25. Which politician caused controversy earlier this year after announcing their intention to leave Leinster House to become chief executive of a leading representative body in the financial sector?

The winner will receive a city break in The Imperial Hotel Cork, part of The Flynn Hotel Collection. You and a guest will check-in for a two night stay with breakfast each morning and lunch on one afternoon of your choice.

Second prize is two nights The Heritage in the rolling green countryside of County Laois. You will enjoy breakfast each morning and dinner on one evening in Blake’s.

Third prize is two nights with breakfast each morning and a dinner on the night of your choice at The River Lee in Cork, a Doyle Collection hotel.

The participants prize is a one-year premium subscription for Irishtimes.com.

Entries should be sent for the attention of Ciarán Hancock to: The Irish Times, 24 Tara Street, Dublin 2 or by email to bizquiz@irishtimes.com

Entries must be received by Wednesday, January 6th. The winners will be announced later that week. Best of luck and Happy Christmas.