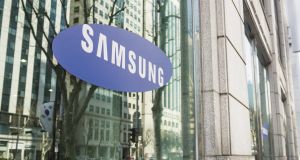 Samsung said it had started construction on a chip-making facility in Pyeongtaek, south of Seoul, dedicated to its made-to-order foundry business. Photograph: iStock

Samsung Electronics has begun building a cutting-edge chip production line intended to help it take on Taiwan Semiconductor Manufacturing in the business of making silicon for external clients.

South Korea’s largest company said it had started construction on a facility in Pyeongtaek, south of Seoul, dedicated to its made-to-order foundry business, an arena TSMC dominates. Samsung expects the facility’s output to go towards applications from 5G networking to high-performance computing from the second half of 2021, it said in a statement.

Samsung, the world’s largest maker of computer memory, smartphones and displays, in 2019 outlined its aim of spending $116 billion (€106 billion) to compete with TSMC and Intel in contract chipmaking, making silicon for customers such as Qualcomm or Nvidia. Its announcement on Thursday coincides with the announcement of restrictions on the sale of semiconductors made with American gear to China’s Huawei Technologies, a constraint that threatens more than a tenth of TSMC’s business.

“This will enable us to break new ground while driving robust growth for Samsung’s foundry business,” ES Jung, head of the contract chipmaking division, said in a statement.

Samsung first unveiled its expansion blueprint in April 2019, outlining at the time its goal of hiring thousands and ramping up investment in logic chips in the years leading up to 2030. That initiative arose as sales of smartphones and consumer electronics plateaued and competition from Chinese rivals depressed margins.

EUV is the latest and most advanced chipmaking method, requiring machines costing tens of millions of dollars and delivering better precision and performance in the chips it produces. TSMC and Samsung, through its spending plan, are the leaders in developing that process and expanding into 5nm and smaller manufacturing nodes.

Before the arrival Covid-19, Samsung had begun collaborating with major clients on designing and manufacturing custom chips and that work was already starting to add to its revenue, a Samsung executive has said. The company’s newest facility in Pyeongtaek joins another 5nm facility in Hwaseong that will begin production in the second half of this year. – Bloomberg

1 Majority of employees don’t want to return to pre-Covid working patterns
2 If tourists are such pariahs should we not be testing them on arrival?
3 Norwegian airline sued in Dublin by inflight caterer
4 Cigarette sales, Leo to meet the banks, and Arclight’s €20m payout
5 Homeworking is depriving me of juicy gossip
Real news has value SUBSCRIBE