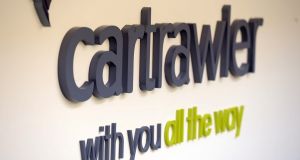 Cartrawler: was thrown into emergency debt restructuring talks as its business was hit by the grounding of airline fleets internationally amid the Covid-19 pandemic. Photograph: Cyril Byrne

Management in CarTrawler, the Dublin-based travel software company hit badly by the Covid-19 crisis, is investing in a rescue refinancing of the business that will see UK private equity group TowerBrook take control of the group in return for a €100 million cash injection.

Group chief executive Cormac Barry told The Irish Times on Tuesday that the executive team will be co-investing as part of the transaction and will also be tied to a stock-based incentive plan as the new shareholders bank on a recovery in the travel industry from the second half of this year.

Mr Barry declined to give details of how much management is investing or the ultimate stake it will hold, other than to confirm that it will be below 20 per cent.

The TowerBrook deal, expected to complete within 60 days subject to competition approval, will also see holders of an estimated €120 million of term debt and banks behind a €25 million revolving credit facility take a large writedown on what they are owed, sources have previously said.

CarTrawler’s owners of six years, BC Partners of London and Insight Venture Partners of New York, will be left nursing large losses as they exit a business they had acquired in a debt-backed €450 million deal in 2014.

CarTrawler, which makes software used by airlines and travel agents to connect to car-hire companies and employs about 425 people, mainly in Dublin, was thrown into emergency debt restructuring talks as its business was hit by the grounding of airline fleets internationally amid the Covid-19 pandemic.

It first emerged earlier this month that TowerBrook was in advanced talks to take over CarTrawler, after the software company went about raising emergency financing.

However, Mr Barry said that it was clear from early March that the company would need fresh funds as bookings dried up and cancellations spiked.

The company has offered customers that have been forced to cancel plans either cash refunds or vouchers valued at 125 per cent of the original booking.

Mr Barry said that there has been an uptick in domestic car hires recently in markets internationally.

The TowerBrook investment “and their deep operational experience and strong network will enable CarTrawler to not only return to previous growth levels but further expand and scale our business”, he said.