You've done what! Left the immersion on! 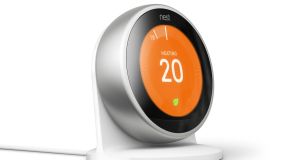 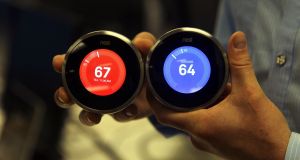 Smart home company Nest has unveiled the newest version of its Nest Thermostat, and it comes with a feature specially added for Irish audience: hot water controls.

The third generation of the Nest product has been updated to include support for the next generation of more energy efficient boilers too, and the thermostat itself has been given some design tweaks to make it slimmer with a larger surface area devoted to the higher-resolution screen.

It also has improved proximity sensors that can pick up movement from further away, prompting the face of the thermostat to turn from a clock face to the temperature settings as you get closer, displaying more information.

The smart thermostat is intended to help cut your electricity bill by learning from your preferences, habits and schedules and adapting accordingly. It has a number of sensors, including temperature, humidity and activity sensors that will read not only the environmental conditions but also recognise if the house has been empty for some time, and adjust its schedule accordingly.

And the days of panicking about leaving the immersion running may soon be over as the new device takes over. Using the Nest Learning Thermostat and the the company’s Nest app, you can set up a schedule for hot water or boost it when needed.

“We had everybody in Ireland saying they hated the programmers for hot water tanks,” said Lionel Paillet, Nest’s general manager, said. “For these homes that wanted better domestic hot water control we’ve integrated it into the thermostat.”

The hot water control can work independently from the heating side of the Nest device, which means when your heating is turned off the summer, for example, you can still boost your hot water.

Like the heating of your home, it also learns from your schedule, and if it detects that you are not home for more than 48 hours, it stops you heating water unnecessarily.

There has also been some future proofing in the device, with the latest version supporting advanced modulation. This technology allows for more energy efficient boilers. Mr Paillet uses the analogy of the car; instead of putting the pedal to the floor, boilers will be able to tap the pedal to get just the right amount of gas to maintain or reach a specific temperature. It uses information such as the target, current and outside temperatures to decide exactly what level is needed.

“The new technology is not there yet in a big way in Ireland. There are some that have that in their homes,” he said. “It’s not really for today, but it’s making sure your nest learning thermostat is ready for it; it’s really about future proofing.

The new device will cost slightly more than its predecessor at €249, a hike Mr Paillet attributes to the euro versus dollar slide in recent months.

Nest has built its brand by redesigning everyday items such as the thermostat and the smoke alarm, making the products smarter and easier to use. Established by Tony Fadell, who was the co-creator of the iPod, the company was bought by Google in January 2014.