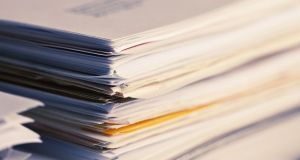 A private investigation firm and its two directors are being prosecuted for allegedly obtaining personal information from gardaí and Department of Social Welfare officials.

Gardaí and social welfare officials allegedly leaked the personal details of more than 30 people to a private investigator who was checking out injury claims against an insurance company.

Dublin-based private investigation company Eamon O’Mordha & Co Ltd of 14 Limetree Avenue, Portmarnock, and its principals Eamon O’Mordha (61) (aka Eddie/Edward Moore) and his wife Ann O’Mordha (60), are facing more than 100 charges between them.

The case was before the Dublin District Court in a prosecution by the Data Protection Commissioner, which has established a special investigations unit under assistant commissioner Tony Delaney.

The charges relate to unlawfully obtaining the private information from insiders in the Department of Social Protection and An Garda Síochána, and “connivance” in their capacity as company directors in the commission of those offences.

Solicitor Clare McQuillan of Philip Lee Solicitors, for the commissioner, told Judge John Brennan the private investigators allegedly used contacts in the department and in An Garda Síochána unlawfully to obtain personal information.

They had allegedly passed that information to insurance firms, from which they had received instructions to carry out background checks on people making personal injury claims, the court heard.

Ms McQuillan said the two directors were being prosecuted under section 22 of the Data Protection Acts 1988 and 2003 with obtaining access to personal data without the prior authority of the data controllers concerned.

They also face charges under section 29 of the acts which allows the directors of a company to be prosecuted personally for alleged “consent or connivance” or negligence in relation to the commission of the offences by their company.

Brian Gageby, defending, told the court his side had received disclosure from the prosecution last week and was seeking time to take instructions.

The judge adjourned the case with the consent of both sides to Monday April 3rd for either a plea or to set a date for hearing.