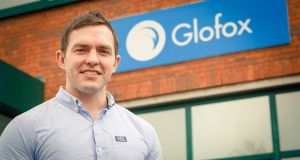 Conor O’Loughlin of Glofox: “We expect to grow revenues by more than 200 per cent for the coming year.” Photograph: Con O’Donoghue

Glofox, a Dublin-based start-up which provides apps and software that help gyms and fitness studios manage their businesses more effectively, has raised €2 million in a funding round with investors that include Enterprise Ireland.

The company, which was established by former Connacht scrumhalf Conor O’Loughlin, is also looking to increase headcount from 25 to 40 as it seeks to expand further in the US.

Currently, the start-up, whose software platform is used in some 500 gyms and studios, derives about 40 per cent of its business from the US, where it is shortly to open a new office.

Mr O’Loughlin, who retired from playing rugby due to a hip injury in 2011, established Glofox with Anthony Kelly in 2013. The company raised €500,000 in funding in early 2016, with half of that coming from Enterprise Ireland’s high-potential start-up unit and the remainder from private investment firm Growing Capital.

Enterprise Ireland also participated in the latest funding round, along with Dublin-based venture capital firm Tribal VC, which has previously backed a number of Irish start-ups, including NewsWhip and Boxever. Other investors included Partech Ventures and Software-as-a-Service (Saas) venture capital fund Notion Capital.

“What the funding is going to allow us to do is to double down on the growth we’ve already achieved. We’ve built a lot of traction, particularly in the US, and are looking at setting up on-site over there on the east coast for sales and marketing,” said Mr O’Loughlin.

Glofox is a complete booking, payment and membership management platform for gyms and fitness studios, as well as independent providers of group training classes, such as yoga or Pilates. The software has a monthly retainer fee of €80-€170.

“There’s a move away from annual fees to pay-as-you-go and drop-in-style classes, and our product is perfect for this,” Mr O’Loughlin told The Irish Times. “The US is our primary focus for the foreseeable future, but we’re also seeing growth in the UK, which accounts for about 30 per cent of business. Overall, we expect to grow revenues by more than 200 per cent for the coming year.”

1 Aldi to impose limits as Christmas toys go on sale
2 Fair deal? Family at odds with hospital and each other not so sure
3 Monsoon landlords win challenge over creditors arrangement that cut rents
4 Irish elearning company LearnUpon closes €47.4 million investment
5 ‘I hate haggling because I hate when people do it to me’
Real news has value SUBSCRIBE