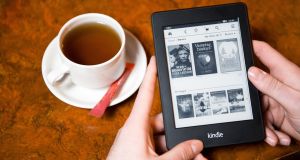 Guess what’s back? Physical books that you can hold in your hand, open wide to breathe in that satisfying ink-on-paper bouquet, and carry without fear into the bath.

Sales of ebooks have continued to gently power down in the US and UK, with physical book sales outstripping those of digital downloads in the UK for the first time since 2011. According to industry research firm Nielsen, ebook sales were down 4 per cent in 2016, while physical books sales rose 2 per cent.

In the US, a report from the Association of American Publishers (AAP) released in November last year indicated sales of digital books were down a very significant 20 per cent. In 2015, a similar AAP report noted a 10 per cent decline in ebooks.

Yet the ebook category once saw explosive growth, jumping 1,260 per cent between 2008 and 2010, according to the New York Times. Though ebooks had been available for many years online – thousands for free, via Project Gutenberg, if you felt like sitting in front of your desktop computer while perusing Proust – the arrival of specialised reading devices helped drive mass interest in the format.

Amazon released its first Kindle model in 2007. Priced at a hair-raising $399, it nonetheless sold out within 5½ hours. Other competitors entered the market, too, such as the Nook, and the Kobo reader.

Sony was in the market years earlier, with its first ereader debuting in 2004. After handling one of the Sony devices around the time the Kindle was introduced, I was smitten with the concept, but not enough to pay for such a luxury item.

Once prices dropped – thanks to Amazon’s ruthless determination to control this market – I got my first ereader, an early generation, grey-screen Kindle. I had debated getting one for a while, and researched the various devices on offer, but wondered whether I’d actually use it after the initial geek hit wore off. I am not a gadget person, and have boxes full of briefly exciting electronic fossils to prove it.

A post-interview conversation in 2011 with Intel futurist Genevieve Bell – a big fan of the Kindle – convinced me to take the plunge. I bought a lovely leather cover tooled with a pleasingly ironic image of a typewriter, but found over time that I used my Kindle more for travel than for general reading. An ereader is fantastic for travel, because you can bring a gazillion books in one lightweight format.

My quibbles with my Kindle? The grey screen was great in direct light – including sunlight, which would wash out a tablet or mobile screen. But my eyes struggled in dimmer lighting, such as under reading lights on aircraft. Grey wasn’t very paper-like, either. I also found it disconcerting not to have the physical sense of where I was in a book, having to rely on a percentage indicator instead.

Overall, I preferred a book in the hand. That seems to place me in the current Nielsen and AAP zeitgeist, an ebook consumer falling away from ebooks and ereader devices (there has been a decline in ereader sales, it seems, too).

But perhaps the ebook and ereader picture isn’t quite that neat and tidy. We read more on tablets and mobiles. And what are Nielsen and AAP figures actually counting? Mostly, mainstream, or AAP-member publisher sales, according to a sceptical article in Fortune in late 2015 that took issue with a big New York Times piece on the AAP figures.

The writer – noting the Times story “had more than a whiff of anti-digital Schadenfreude about it” – said AAP and Nielsen figures are based on a limited number of publishers and excluded small, independent publishers, and the self-published books that make up a significant portion of ebook sales on Amazon (which has the lion’s share of the ebook market, over 70 per cent in the US). He also noted that many traditional publishers had raised ebook prices after reaching an agreement with Amazon that allowed them to set their own ebook prices.

More recent, exhaustive and fascinatinganalysis of 2016 book sales figures by the AuthorEarnings site (http://authorearnings.com/report/dbw2017/) came to this conclusion: the only reason print book sales are up (slightly) is because Amazon began discounting prices on print books in mid-2015, after publishers raised ebook prices and eliminated retailer ability to discount ebooks.

Not then for all those reasons – digital “fatigue”, adult colouring-book popularity, a waning ebook “fad”  – suggested in 2015, 2016 and again in the wake of last week’s figures.

As for me, I decided last month to call time on my six-year-old Kindle, and splurged on a Kindle Voyager with a vastly improved reading experience. I love it. No longer will my Kindle be consigned to holiday reading.

Bottom line? Readers just like reading. Format will be increasingly flexible. Really it’s about the words not about the technology, or lack of it.