Fundraising round by Immersive garners €1m in investment 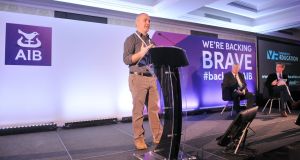 Immersive VR Education (IVRE) has raised €1 million in investment as it seeks to develop its platform for educational virtual reality content.

The fundraising round, which was led by Kernel Capital through the Bank of Ireland Kernel Capital Venture Funds and Suir Valley Ventures, will allow the company to embark on a fresh round of recruitment to fill development and technical roles. The Waterford-based tech firm said it planned to increase its staff to 30 by the end of the year, from the current 17.

This was the first major fundraising round by the company, which was spun out from Waterford Institute of Technology’s research-based Telecoms Software and Systems Group (TSSG). The platform helps provide virtual-reality content for use in schools, colleges, universities, research centres and corporate training in a more immersive environment.

“As soon as I put it on, I knew my direction, that I wanted to go into VR,” he said.

The new funding will give the firm breathing space as it recruits – a challenging process in the competitive market for tech talent. Mr Whelan said products such as the Apollo 11 experience helped to showcase the company’s work and encourage people to come and work for it.

The impending Brexit has helped the company too, Mr Whelan said, with a noticeable increase in the number of job applications coming from the UK since the referendum last year. At present, the company’s workforce is split between people from Ireland, the UK, the US and Australia.

It has also begun a collaboration with Oxford University and the Royal College of Surgeons to develop VR-based training programmes for medical professionals.

1 Fianna Fáil may have just pressed the pause button on the property market
2 Who are Ireland’s 17 billionaires?
3 My father in a nursing home wants to gift me his house
4 Are there annual limits on inheritances or gifts to a child?
5 European investor acquires Harcourt Road offices for €55m
Real news has value SUBSCRIBE