With Android P, your digital health could be AOK

Weblog: next iteration of mobile OS will keep track of time spent on your phone and apps 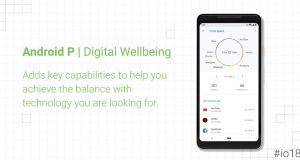 There were some interesting announcements at the annual Google I/O event, including the news that Google Assistant is getting six new voices, one of which will be supplied by musician John Legend. But a new and welcome focus was the theme of digital wellbeing.

The next iteration of the Android mobile OS, Android P, will include a dashboard that tells you how much time you are spending on your phone, including time spent on individual apps, how many notifications you’ve received and how many times a day you unlock your phone – which may gobble up an already sizeable market of apps in the Play Store offering these services.

There will also be a new feature known as App Timer that does what it says on the tin: lets you set time limits on apps. It will notify you when your time limit is almost up and proceeds to grey out the app icon to remind you not to give into the temptation of tapping it again.

Do Not Disturb mode is also getting a tweak: it won’t just silence phone calls and notifications, but will stop any and all visual interruptions onscreen, forcing you to take a proper break from your phone.

1 John FitzGerald: Backing EU tax plan could be politically wise
2 Penneys will not reopen on Monday despite expected changes to lockdown rules
3 Major credit union plans to limit savings accounts to €40,000
4 Student accommodation sector set for harsh Covid-19 lesson
5 Wild Geese: ‘I love to introduce and inspire people of all ages to the mountains and cliffs’
Real news has value SUBSCRIBE