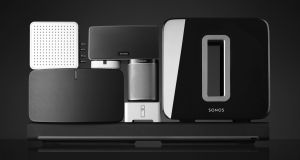 Sonos’s filing did not reveal how many shares it planned to sell or their expected price.

Wireless speaker company Sonos filed for an initial public offering (IPO) on Friday, riding on the back of increasing popularity of streaming music on connected audio systems though smartphone apps.

The Santa Barbara, California-based company, backed by KKR Stream Holdings LLC, said it intended to list on the Nasdaq Global Select Market under the symbol “SONO.”

Sonos’s connected speakers have attracted audiophiles around the world, with the company partnering with about 100 music streaming providers including Apple Music, Pandora, Spotify and TuneIn. The company’s smart speakers range in price from about €179 for its mini home speakers to €799 for its television audio products, though its top-end systems can cost thousands of euro.

The company’s products are distributed in more than 50 countries and 55 per cent of the total revenue in fiscal 2017 was from outside the United States.

The filing did not reveal how many shares Sonos planned to sell or their expected price. The company set a nominal amount of $100 million to indicate the size of the IPO.

The amount of money a company says it plans to raise in its first IPO filings is used to calculate registration fees. The final size of the IPO could be different.

Morgan Stanley, Goldman Sachs and Allen & Co are among the lead underwriters for the offering. – Reuters