What went wrong with the rural broadband scheme?

Why ‘rural electrification for the 21st century’ is taking so long 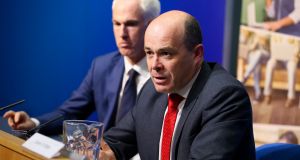 The ambition of Minister for Communications Denis Naughten is to provide “next generation” broadband to all homes and businesss in the State through a combination of commercial and State investment. Photograph: Maxwells.

How much of a Government priority is broadband?

When then minister for communications Pat Rabbitte launched the National Broadband Plan (NBP) in 2012, he described it as “rural electrification for the 21st century”. His successor Alex White and the current Minister Denis Naughten have also invoked the comparison to highlight the scale of the project, as well as the necessity of broadband to people’s lives today.

What did the National Broadband Plan promise?

The ambition was - and still is - to provide “next generation broadband to every home and business in the State” through a combination of commercial and State investment. Over the years, the speeds promised have increased, while the timelines have extended further into the future.

Big statements on broadband were not born with the NBP: Rabbitte’s predecessor Eamon Ryan claimed in 2010 that Ireland would have “broadband everywhere” by 2012.

In 2013, the Government hired experts to “assist in the design, planning and procurement” of a State-led investment in high-speed broadband. The following year, Rabbitte declined to give an exact time frame on when the NBP would be completed, but said it would take at least three years. Amid rising costs, he said his Department had gone for “the Rolls Royce option” on speed to ensure adequate connectivity across the State.

Some were, but not everywhere, and even where the companies believed there was a purely commercial reason to invest in their networks, they often reported that local “bottlenecks” were holding them up.

In 2014, White published a map depicting where broadband providers intended to deliver high-speed access to some 1.6 million homes and businesses on a commercial basis. Some 600,000 homes and 100,000 businesses were said to require State intervention under the NBP - this number later rose after some homes were found to have connections of lower than 30 Mbs - a new minimum standard for adequate connectivity - while for other homes, the commercial investment did not materialise.

The Government said in 2014 that 85 per cent of Irish homes and businesses would have high-speed broadband in 2018.

Who were the bidders for the NBP?

It appeared some progress had been made in 2016 when three bidders were shortlisted for the 25-year contract to provide State-subsidised broadband to those rural and remote areas where it would not be commercially viable to provide a service. The three bidders were Eir, Enet and Siro, a joint venture between the ESB and Vodafone.

So what went wrong?

Last year, the Government made a controversial decision to allow Eir to effectively remove 300,000 homes from the original plan and include them in its own commercial rollout. This is the so-called “light blue” area of Government’s broadband map.

The move caused a further delay to the remaining homes in the NBP and also prompted Siro to withdraw from the process. Siro had viewed the 300,000 homes - the least awkwardly located - as the quasi-commercial end of the plan and believed their removal undermined its viability.

Now Eir itself has withdrawn, saying the risks that had become “too great for its continued participation”. This leaves the Enet consortium, which now also includes energy group SSE, as the sole bidder in what is supposed to be a competitive tender.

Will shovels ever be in the ground?

Despite repeated promises of putting “shovels in the ground”, for many homes and businesses in rural Ireland, the shovels are still hovering somewhere far above ground. Work on the NBP is now not expected to begin until early 2019 - at least 2019. Its completion date is anyone’s guess.

With the plan yet to be given its green light, some 540,000 homes and businesses located in what’s known as the “amber area” remain in connection limbo.

As the Department of Communications website tells people who live and work in the amber area, “the procurement process is very complex”.