What does the future hold for our species? Ask the experts 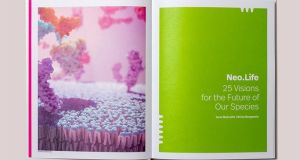 Neo.Life is all about the future of humanity. This relatively new online publication, created by Wired co-founder Jane Metcalfe, looks at biohacking, the microbiome, genetics, synthetic biology, transhumanism and more. Neo.Life has also published a book titled 25 Visions for the Future of Our Species and the book launch will be in the form of an interactive livestream.

Next Thursday, April 9th, this livestream will include a conversation between contributors to the book. Synthetic biologist and artist Christina Agapakis, professor of health sciences and technology at Harvard and MIT George Church, and futurist and managing director of Excel Venture Management Juan Enriquez will offer “a big-picture perspective on the profound changes made possible by the merging of biology and technology”.

Registration for the event is free and audience members are encouraged to ask questions via live chat. To keep all aspects of the livestream future-oriented, it is sponsored by something known as Glyph molecular whiskey, which is apparently whiskey whose molecular components are obtained directly from plants while being identical to conventional distilled and aged whiskey. No, I had no idea either that whiskey could be high tech.

Anyway, this is a chance to ask some experts everything you have ever wanted to know about how technology is transforming what it means to be human.

1 BOI customers to be charged twice with bank fees on New Year’s Eve
2 Irish designer of Oxford vaccine: ‘I’ve never worked so hard in my life’
3 Covid-19 will worsen housing affordability, report warns
4 Being polite in work emails is more important than ever
5 Chris Johns: I think we are on the cusp of an economic boom
Real news has value SUBSCRIBE