Web Summit under fire over banquet in Portugal’s National Pantheon 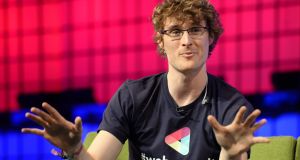 Web Summit founder Paddy Cosgrave: “I love this country as a second home and would never seek to offend the great heroes of Portugal’s past.”

Web Summit organiser Paddy Cosgrave has apologised after Portugal’s prime minister expressed outrage over an “offensive” summit banquet in Lisbon’s National Pantheon, the site of tombs for some of the most revered national figures in Portuguese history.

António Costa, the prime minister who opened last week’s Web Summit in Lisbon, said the decision to host the Founders’ dinner in the Pantheon at the conclusion of the event was “unworthy of the respect due” to the national monument.

He blamed the previous Portuguese government for allowing the dinner to be organised at the venue, and said he would change the rules to prevent the Pantheon being used for similar events in future.

News that a private dinner hosted by Cosgrave had taken place in the central hall of the Pantheon caused a media storm in Portugal in recent days, as critics piled on to lambast the dinner as disrespectful to the nearby tombs.

Other Portuguese commentators over the weekend said the criticism was overblown, and highlighted that the site has been used for dinners in the past, and was once hired out for the launch of a Harry Potter book.

Dear Portugal, I apologise. I’m Irish. Culturally we have a very different approach to death. We celebrate it. That does not make it the right approach when in Portugal. I love this country as a second home and would never seek to offend the great heroes of Portugal’s past. Paddy pic.twitter.com/Li2AiUtYRC

The site is a former church that was converted to a national monument, with the conversion completed during the reign of Salazar in the 1960s.

It is home to the remains of national heroes such as the footballer Eusebio, several former Portuguese presidents including the first elected leader, Manuel de Arriaga, and writers such as João de Deus and Almeida Garrett.

Mr Cosgrave said on Twitter that he wished to “apologise for any offence caused” by the dinner. He said Irish people have a different cultural approach to death, and prefer to “celebrate it”.

The invitation-only Founders’ dinner was previously hosted in the crypt-laden Christ Church Cathedral when the Web Summit took place in Dublin.

“I love this country as a second home and would never seek to offend the great heroes of Portugal’s past,” said Mr Cosgrave, who added that the Founders’ dinner had been organised according to the rules of the Pantheon venue.

The director of the Pantheon, Isabel Melo, rejected calls for her resignation over the dinner. She said the event had been approved by the culture ministry.

Meanwhile, Mr Cosgrave has so far refused to commit to extending the Web Summit’s stay in Lisbon beyond the original three years, which expires at the end of the 2018 event.