Shutdowns in Ethiopia have cost the government $4.5 million each day 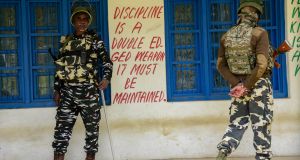 Indian forces outside a polling station during paramilitary elections in Kulgam, south of Srinagar in 2019. Photograph: Idrees Abbas/SOPA Images/LightRocket via Getty Images

We like to complain about the toxicity of social media and talk about our plans to unplug for the holidays and just take a break from it all. On the other end of the spectrum there are citizens of countries around the world where the act of unplugging is decided for them.

The Worldwide Web Foundation, founded by Sir Tim Berners-Lee, has some stats on government-ordered internet shutdowns that they describe as a “flagrant abuse of human rights”.

President Idriss Deby of Chad only recently lifted a ban on social media sites including Facebook, Twitter, WhatsApp and YouTube, that lasted one year, three months and 17 days.

Meanwhile, in India, 65 shutdowns have occurred in 2019 alone, which usually involves shutting off mobile internet services in certain districts. And it’s not without repercussions for the authorities either: shutdowns in Ethiopia have cost the government $4.5 million for each day they disrupt access to citizens.

The Web Foundation quotes a recent report from the non-profit Access Now: “Whether they are ordered in Ethiopia, Chad, Venezuela, or India, and whether they are justified as a measure to fight ‘fake news’ and hate speech or to stop cheating during exams, the facts remain the same: internet shutdowns violate human rights, put people in danger, and harm the economy.”