Ecommerce is transforming payments processing into an exciting area of growth 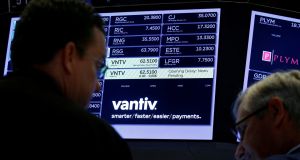 Traders wait for news at the post where Vantiv Inc is traded on the floor of the New York Stock Exchange. Photograph: Brendan McDermid/Reuters/File photo

Vantiv has struck a deal to buy British payments processing rival Worldpay for £9.3 billion (€10.3 billion) after weeks of negotiations to create the biggest company in the industry by number of transactions.

The combined group, which is valued at £22.2billion, will retain the name Worldpay and have its international headquarters in London.

The terms of the deal were improved after pressure from investors following an announcement of the original offer last month – and rival interest from US bank JP Morgan.

Vantiv’s swoop is a sign of how ecommerce is transforming the sector from a sleepy backwater of finance to an exciting source of growth amid the shift from cheques and cash to cards and digital payments. Analysts expect further deals as smaller rivals battle for scale.

Worldpay, founded by entrepreneur Nick Ogden in the 1990s, was previously owned by Royal Bank of Scotland but was sold by the lender in 2010, at a valuation of just £2 billion, as an EU condition of its financial crisis state bailout.

RBS sold 80 per cent of Worldpay to private equity groups Bain Capital and Advent International in 2010. It offloaded the remaining 20 per cent to the groups in 2013. Bain and Advent invested about £1 billion in the business and doubled the number of employees to about 4,500 before an initial public offering in 2015. They sold out following the listing.

The new company will be led by co-chief executives, Charles Drucker, president and chief executive of Vantiv, and Philip Jansen, a turnaround specialist who was brought in to run Worldpay by its former private equity owners. Mr Jansen said he would roll his stake in Worldpay, thought to be worth more than £30 million, into shares in the combined company. Worldpay’s UK chief executive, Peter Jackson, is due to move to Paddy Power Betfair, where he will replace Breon Corcoran as chief executive.

Mike Rake, chairman of Worldpay and the outgoing chairman of BT, will be lead director of the board of the combined group.

1 HSBC board rethinks overhaul and seeks even deeper cuts
2 Joint accounts: if one of us dies, can the other access the money?
3 Working from home: New costs, new stresses and little relief
4 Coronavirus: New government could face €11bn of austerity
5 Stocktake: History says this is not a bear market rally
Real news has value SUBSCRIBE