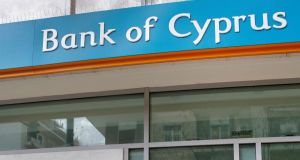 Iaasa found that Bank of Cyprus Holdings was not in compliance with certain accounting requirements in its 2017 annual report. Photograph: Yannis Behrakis/Reuters

The Irish accounting and auditing watchdog urged the Dublin-based holding company of Bank of Cyprus and oil and gas explorer Aminex to improve the level of disclosures in recent financial reports, after finding that they were not fully compliant with accounting standards.

The Irish Auditing & Accounting Supervisory Authority (Iaasa) also highlighted where it saw room for improvement in reporting by fledgling UK specialist lender Astute Capital, which has debt listed on the Euronext Dublin exchange. In addition, it took travel software group Datalex to task after it became the subject of an accounting scandal last year, according to the report, published on its website on Tuesday.

Iaasa found that Bank of Cyprus Holdings was not in compliance with certain accounting requirements in its 2017 annual report in terms of information provided to readers to support the level of deferred tax assets held on its balance sheet. Deferred tax assets are accumulated from prior losses to lower future tax bills, and are dependent on a company’s forward-looking profit assumptions. These accounts were audited by EY.

The bank holding company was set up in Ireland in 2016, when the group was then led by Irishman John Hourican, to secure a route for a listing on the London Stock Exchange.

Iaasa also raised concerns about how Bank of Cyprus classified repossessed properties as inventory rather than investment property, when it can take up to six years to sell such assets, during which time they may be earning rent and rising in value.

A spokesman for Bank of Cyprus said that it had “addressed all items noted by Iaasa in our 2018 and 2019 financial statements accordingly and that no further action is expected from the regulator on these”.

The accounting authority said Aminex should have carried out impairment assessments of three cash-generating units under accounting requirements in 2018. KPMG was the company’s auditor at the time.

Iaasa said it made no judgment on whether such an assessment would have led to an impairment charge.

“Aminex has co-operated fully on all points raised and has implemented the appropriate actions to the satisfaction of Iaasa,” a company spokesman said.

Iaasa said that Astute Capital should have given more detail on its loan portfolio and activities, as well as risks to the UK property market in its annual report to March 2019. This was audited by BDO. Astute director Richard Symonds said the company has undertaken to address these in subsequent reports.

Datalex, which warned last year that it had overstated revenue and earnings for the first six months of 2018, restated the report at the end of last year following engagement with Iaasa. Datalex’s auditors for the 2018 financial year, EY, declined last year to sign off on the company’s full-year accounts.

Datalex published its 2019 results on Tuesday.

Iassa does not re-perform audit procedures or seek to determine whether there are issues with the financial statements. However, it deems the decisions highlighted in the report to be “significant” because they promote high-quality financial reporting, may have wider implication for other companies, or be of interest to other European accounting watchdogs.

1 My aunt never told us that Gran passed away with no will
2 Ryanair and Aer Lingus cut flights as travel restrictions continue
3 Political row brewing if Ireland loses its appeal on Apple
4 The $6bn judgment pitting Nigeria against Irish businessmen
5 Aviva brings case over €5.5m sale of Bank of Ireland building
Real news has value SUBSCRIBE