Details of US case against Meng Wanzhou were laid out during a court hearing in Vancouver, Canada 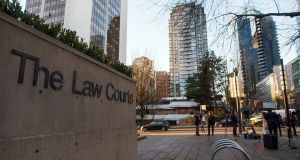 Members of the media outside Vancouver supreme court ahead of a bail hearing for Huawei’s chief financial officer Meng Wanzhou on Friday. Photograph: Bloomberg

US authorities are seeking the extradition of Huawei’s chief financial officer on an allegation of fraud, claiming that Meng Wanzhou lied to US banks about the relationship between the Chinese telecoms group and a company called Skycom in order to circumvent sanctions on Iran.

The details of the US case against Ms Meng were laid out during a court hearing in Vancouver, Canada, where she was arrested last weekend while in transit from Hong Kong to Mexico.

A Canadian prosecutor described Ms Meng as a flight risk because she had “access to vast resources and connections”, and has been “avoiding the US since becoming aware of criminal investigations in that country”.

Ms Meng faces multiple fraud counts, each of which carries a maximum penalty of 30 years in prison, the prosecutor said.

A warrant for her arrest was issued in August in a federal court in Brooklyn, the Canadian lawyer said on Friday.

Friday’s court hearing is the first official glimpse at details of the case which gripped global markets with fears that it could mark a new escalation in the trade war between the US and China.

The Canadian prosecutor, acting on behalf of the US, said Ms Meng lied about the relationship between Huawei and Skycom Tech Limited during a meeting with bank HSBC.

Reuters reported in 2013 that Skycom had offered to sell embargoed Hewlett-Packard equipment to Mobile Telecommunication Co of Iran. After that article was published, HSBC contacted Huawei, and Ms Meng gave them assurances that the company was in compliance with sanctions laws.

In an affidavit, US authorities said that Skycom was an “unofficial subsidiary” of Huawei that it operated from 2009 to 2014 “in violation of sanctions”.

The US justice department has been conducting an investigation for at least two years into whether Huawei breached sanctions against Iran, and has requested information on the company from its bankers, according to people familiar with the investigation.

China has demanded Ms Meng’s release, and Huawei has insisted that it was in compliance with sanctions laws. – Copyright The Financial Times Limited